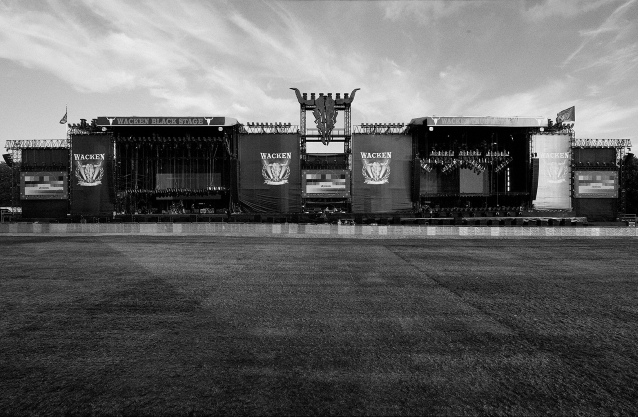 This Year's WACKEN OPEN AIR Festival Has Been Officially Canceled

This summer's German rock music festivals, including Rock Am Ring, Rock Im Park, Wacken Open Air and Bang Your Head!!!!, have been canceled after the German federal government banned all major events in the country due to the COVID-19 pandemic.

German Chancellor Angela Merkel announced tentative steps to slowly start returning the country to normal, explaining that no large events such as soccer matches, concerts and festivals will be allowed before the end of August at the earliest. This comes in addition to personal lockdown, which has been extended through May 3.

"Yesterday, the German government decided that due to the Coronavirus pandemic, no mass gatherings will be allowed until August, 31st, 2020. We are facing an unprecented situation in our 30 years: It is with heavy hearts that we have to announce that there will be no Wacken Open Air this year.

"Our whole team has been working intensively on the festival these last months and the more all of us are bitterly disappointed that we are not allowed to celebrate a Wacken Open Air with you. This administrative order affects us heavily and we will need some time to process the bad news.

"Nevertheless, we support the decision of the German government in this difficult situation for the whole world. Your health and safety have always been and always will be our top priority. We as promoters are therefore bound to take an even greater responsibility and have to follow the instructions of the experts.

"Concerning Wacken Open Air 2021 and options for your already bought tickets, we will reach out to you ASAP but ask for a little bit of patience whilst we work through this. We thank you for your trust during times which are unparalleled for all of us.

"Stay healthy - In Metal We Trust!"

Rock Am Ring, Rock Im Park, and Wacken Open Air were scheduled to take place from June 5-7 and July 30 to August 1, respectively.

According to Deutche Welle, organizers for Rock Am Ring and Rock Im Park festivals said they rescheduled their events for next June. They called the decision "disappointing" for the bands and the 175,000 who attend the festivals, which take place at the Nürburgring race track and in the city of Nuremberg respectively.

The Hurricane festival, which takes place in northern German town of Scheessel and draws around 80,000 fans, also canceled its festival this year.

"This shadow has been looming over us for weeks, but now it is upon us. And it hurts, it hurts really bad," Hurricane organizers said in a statement.

Taking place in the municipality of Wacken in Schleswig-Holstein, Germany, Wacken Open Air is the largest, most established heavy metal festival in the world.

Wacken 2020 sold all 75,000 tickets in the space of a few hours, and was scheduled to entertain over 150 artists performing across eight stages over 280 hectares of land.

According to Germany's Robert Koch Institute (RKI),the country has more than 127,000 confirmed coronavirus cases and has reported more than 3,250 deaths.

The German government last month passed a stimulus package worth 750 billion euros in a bid to help ease the effect of the virus.

yesterday, the German government decided that due to the Coronavirus pandemic, no mass gatherings will...