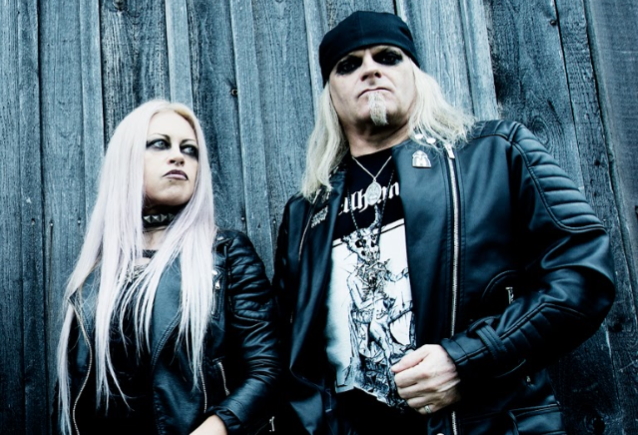 Ex-CELTIC FROST frontman Thomas Gabriel Fischer (a.k.a. Tom G. Warrior) has disputed comments recently made by his former bandmate Mia Wallace over the fate of their NIRYTH project.

Several days ago, Fischergave an interview to Metal Wani in which he revealed that he and drummer Pidi Leuenberger left NIRYTH for "very, very important reasons, crucial reasons," adding that those same reasons were behind their decision to "dismiss" Wallace — whom he did not mention by name — from TRIUMPH OF DEATH, which revisits the music of his pre-CELTIC FROST band HELLHAMMER. Fischer went on to say that the material that was originally meant for NIRYTH — which he worked on "for one and a half years" and said was "some of the best material I've ever written" — would be changed "slightly" and released under a different name later in the year. He also explained that he didn't want to keep the NIRYTH moniker for the new project because he "wanted to have a clean start" and "didn't wanna have any bad feelings attached to it."

On Friday (May 29),Wallaceissued a statement disputing some of Fischer's assertions regarding how the NIRYTH project was conceived and accusing her former bandmate of trying to "create gossip by throwing mud at my person." Among other things, the Italian-born musician said that Fischer's statement that he "owns" the material originally intended for NIRYTH is "a big fat lie"; that the songs were registered with the German copyright collecting society GEMA with a 50/50 split between Fischer and Wallace (with Fischer having written 100 percent of the lyrics); and that NIRYTH's music is "the result of years of pain and passion put into music."

After BLABBERMOUTH.NET published Wallace's statement, Fischer took to his long-running online blog, "Delineation II" to respond directly to her accusations, saying that he co-founded NIRYTH with Wallace in August 2017 and claiming that he not only wrote all of the NIRYTH lyrics, he also co-wrote all of the music.

Fischer wrote, in part: "NIRYTH started as a beautiful and possibly naively idealistic extension of the relationship Wallace and I shared during the time we were a couple. We knew, of course, that our romantic affiliation could end, and we felt that the music we created together in NIRYTH was so important to us that we agreed to continue the project on a professional level should this ever happen. And that's what was attempted when we actually did split up. There are numerous successful examples for this in our scene, from FLEETWOOD MAC to DEAD CAN DANCE. Unfortunately, by the end of the year, we had reached the end of the road, for a great many reasons (related and unrelated to our common private past),most of which can readily be corroborated by numerous witnesses.

"In my letter of dissociation, dated December 11, 2019, I informed Wallace that we in TRIUMPH OF DEATH unanimously and irrevocably felt we needed to continue the band with a different line-up, and Wallace was thus dismissed. But with regard to NIRYTH, I left the choice — of whom of us would continue the project — entirely to her. After a lengthy period of deliberation, Wallace decided to continue NIRYTH, and drummer Pidi Leuenberger and me left the project. We intended to form our own, different version of the band. Not to be in competition with NIRYTH, but because all three of us NIRYTH members had invested so much work, time, and money into this music, and we felt a very strong attachment and confidence with regard to these songs."

You can read Fischer's full response to Wallace's statement at this location.

In addition to her work with TRIUMPH OF DEATH and NIRYTH, Wallace has played with THE TRUE ENDLESS (under the controversial moniker Soulfucker),KIRLIAN CAMERA and ABBATH, the solo project of former IMMORTAL frontman Abbath.