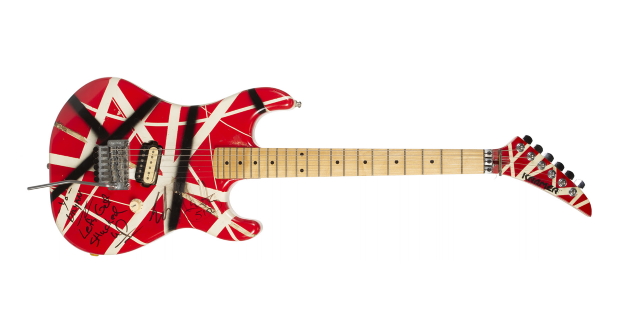 The top-selling item of the event was an iconic guitar played by one of the greatest guitarists of all time — Eddie Van Halen. His customized Kramer electric guitar serial number F 0024 built by Van Halen with his guitar tech Matt Bruck at the guitarist's 5150 home studio sold for $231,250 and features a red body with white and black stripes designed and applied by Van Halen. It was gifted to Van Halen's close friend Bryan Cush, the owner of Cush's Centenary Oyster House in Shreveport, Louisiana in 1991 It is inscribed "Yo - / Bryan / Let's get / shucked / up / Eddie Van Halen / 5150" and was displayed at the bar where it was played by Van Halen when he visited. The guitar also includes a white Van Halen guitar pick and two backstage passes, one labelled "Bertinelli Guest."

Van Halen's 2004 EVH Charvel Art Series electric guitar was another auction highlight which sold for $140,800. The Fender Stratocaster-style headstock numbered on the back #54, has the unique white and black abstract design in the style of his 1978 "Van Halen I" guitar and signed Eddie Van Halen, initialed VH 04 and is inscribed in Van Halen's hand "San Antonio Texas / 9-28-04". This guitar also features an EVH humbucking pickup with evidence of a cigarette burn to the front. Accompanying the guitar are multiple photos of Van Halen hand-applying taped stripes to the guitar. The EVH Charvel Art guitars are a limited-edition series of guitars inspired by Eddie Van Halen's most famous guitars where each one has a unique body, designed by Van Halen himself.

A scaled down non playing version of an Eddie Van Halen red, black and white striped prop guitar, used by child actor Bryan Hitchcock playing a young Eddie Van Halen in the iconic VAN HALEN music video to their hit "Hot For Teacher" scored top grades at the auction with a winning bid of $50,000. The guitar is accompanied by Hitchcock's "Young Eddie" three-piece outfit from the video comprising of a white T-shirt with "No Bozos" graphic print to the front; a pair of "Sergio Valente" torn jeans and an "Oleg Cassini" denim vest as well as production documents including a script, three call sheets from the video shoot, a large color photograph of Hitchcock and Eddie Van Halen posing with their guitars at the shoot and more.

Kurt Cobain rocked the auction stage with his stage played and smashed black Fender Stratocaster guitar used on NIRVANA's 1994 "In Utero" tour and gifted by the grunge icon to an audience member after their performance at the Palais Omnisport de Rennes in Rennes, France, on February 16, 1994 which sold for $128,000 as well as his cream colored signed Fender Stratocaster electric guitar and stage played and smashed by Cobain in Buenos Aires, Argentina, on October 30, 1992, while performing with NIRVANA, which sold for $153,600.

A circa mid-1960s Hammond B-3 organ played by one of the finest Hammond organists of all time, Gregg Allman, sold for $102,400. Allman played this instrument extensively during live performances with THE ALLMAN BROTHERS BAND and with the GREGG ALLMAN BAND from the late 1980s until Allman's final Lake Tahoe show on October 3, 2015.

Some of rock and roll's most glittering wardrobe and accessories stole the auction stage such as a pair of metallic silver pants with metal stud decorations stage worn by Iggy Pop and on the front and back covers of Iggy and THE STOOGES' 1973 album "Raw Power" that sold for an astounding for $70,400; items from the dazzling style of The King, Elvis Presley, reigned once again including his black macramé zodiac belt which sold for $46,875, his sterling silver ring with the letter "E" carved on the top plaque which sold for $19,200, his karate belt sold for $16,000, his 14K gold necklace with eagle pendant and leather and fur coat that each sold for $12,800 and one of Little Richard's most outrageous costumes worn on his 1970 album "The Rill Thing".

The headline should read:

“Three guitars that are striped were sold at an auction for charity.”

I had nothing to do with this.

I don’t EVER plan on selling any of my father’s iconic guitars.

The only place they’d possibly belong in is a museum. https://t.co/npM4TZKWYU

Also one was a gift. I don’t know who’d want to give that away. Timing is a little fishy to me.

It WASN’T for charity.

They’re just taking advantage of my father’s passing. What a surprise.