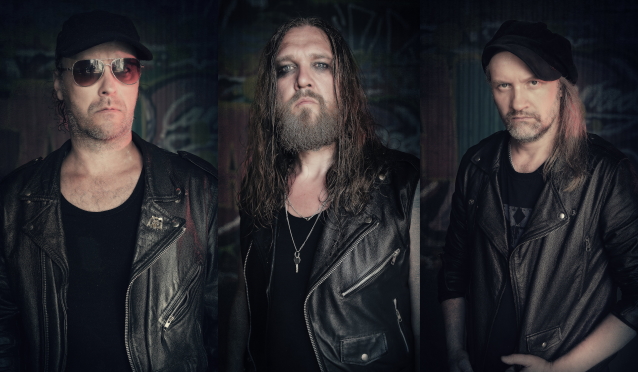 Swedish metallers KNIGHTS OF THE REALM, who feature in their ranks TIAMAT drummer Lars Sköld, will release their self-titled debut album on November 12.

KNIGHTS OF THE REALM is many years of heavy metal experience combined into a pure vicious heavy metal machine. Sköld (a.k.a. Larry "The Hammer" Shield) has toured the globe and recorded with legendary band TIAMAT for as long as he can remember, and is without a shadow of a doubt the band's backbone. Magnus "Megalomangan" Henriksson has been making history with his band ECLIPSE since the end of the 1990s and is a bona fide guitar hero who's both capable of some heavy-duty riffage as well as delivering gorgeous melodies. Marcus Von Boisman (Mean Machine) has been working in the shadows of metal for many years, and played with Swedish bands WINDUPDEADS and STORMEN.

The love for classic heavy metal is the driving force behind KNIGHTS OF THE REALM. The aim from the beginning was to write heavy metal hits that should, or could, have been on the albums they grew up listening to. When the songwriting process began, it was like opening Pandora's box. The overall feeling was that those songs were calling out to be written and to be played, and the band's collective ideas, dreams and experiences merged into something new, something that can hopefully lure a new generation of rockers into that metal club we all love.

The first taste of KNIGHTS OF THE REALM's music, in the form of the music video for the band's debut single "Fields Of Fire", is available below.

"Knights Of The Realm" will be released on CD, LP and digital.