Welsh opera legend Bryn Terfel has joined forces with late TIGERTAILZ bassist Pepsi Tate's wife, soprano and West End star Shân Cothi and TIGERTAILZ to record a "rock opera" version of the 'TAILZ classic ballad "I Believe". The video can be viewed below.

"I Believe" is being used to launch the official Amser Justin Time charity which has been set up by Pepsi's wife Shân to help raise money and awareness for pancreatic cancer.

The song will be released on Monday, September 22 as a digital download only with all proceeds going to the Amser Justin Time charity. A video has also been shot to accompany the track; this will also be available via digital download.

TIGERTAILZ will join Bryn Terfel and Shân Cothi on stage this weekend (Sunday, August 24) at the Faenol Festival in North Wales to showcase the new track.

Commented the band: "We please ask that all you 'TAILZ maniacs across the world please download 'I Believe' on September 22 as soon as it's released. More details will follows soon. Many thanks for all your support." 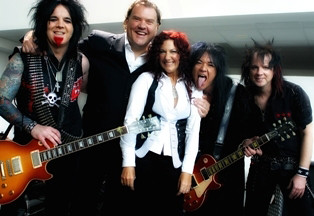