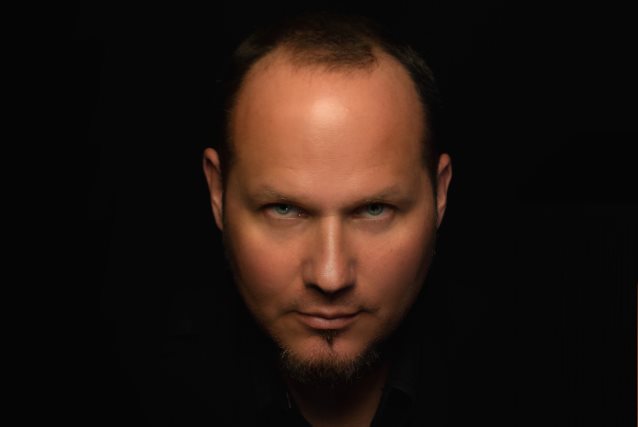 TIM 'RIPPER' OWENS On Touring With RONNIE JAMES DIO Hologram: 'We Don't Do It For The Money'

Tim "Ripper" Owens has once again defended DIO DISCIPLES' decision to go on the road with a hologram of Ronnie James Dio, saying that he is only doing it to "celebrate" the legendary heavy singer's "life and music."

The "Dio Returns: The World Tour" production uses audio of Ronnie's live performances from throughout his career, with the DIO DISCIPLES band playing live, consisting of Craig Goldy on guitar, Simon Wright on drums and Scott Warren on keyboards, along with Bjorn Englen on bass. Also appearing with them are Owens and LYNCH MOB's Oni Logan.

Speaking to IndeOnline.com about how he came to be involved with the "Dio Returns" tour, the former JUDAS PRIEST singer said: "Wendy [Dio, Ronnie's wife and manager] and the hologram people both asked if I would be interested in singing. I love doing the DIO DISCIPLES stuff, and this is definitely done for the love.

"I'll hear people say, 'Oh, someone's making money.' No, someone — Wendy Dio — is spending tons of money to try to make fans happy," he continued. " We don't do it for the money. I get paid more doing solo stuff, but I love it. I love Wendy and Ronnie was a friend, so we just love doing it and celebrating Ronnie's life and music."

Asked if there was any trepidation on his part to take part in the tour, Owens said: "At first, I wasn't sure about the hologram. But I thought, 'I would love to at least see a David Bowie/Ziggy Stardust hologram or a Bon Scott hologram.' Maybe I wouldn't like it; I don't know. But with us, it's a live band playing to Ronnie's vocals. I think it would be really cool to see those other artists in the same way, so that's the way I kind of looked at it. I thought, 'Let me try this.' I get some people might not want to see it, but the strangest thing is that a lot of those people would go watch a movie with a digitally created person that has passed away and be fine with it. Not liking it is one thing, but to attack Wendy Dio, who is doing it to try to make fans happy, that's the problem."

When I read comments on @BLABBERMOUTHNET mouth, all I can think is they must be single! All they do is bitch, complain, and they know everything! It’s like snowflake central. #Snowflake