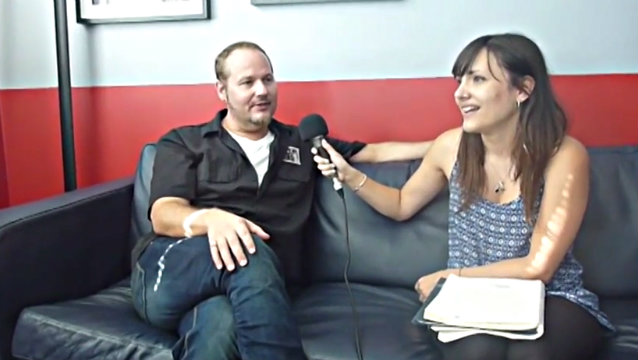 Asked what life has been like after JUDAS PRIEST, Owens said: "Great. I mean, I get to do what I want musically. And I travel more places and do more things. I play with musicians from all over the world and musicians that I grew up listening to. So it's really good. I haven't died."

Owens also spoke about the inability of certain artists to reproduce their music live as it was originally written and recorded in the studio. He said: "As a fan of music, I like to see music performed how it should be performed, close to the versions or better.

"I don't like to hear singing that's… or guitar playing, or whatever, that's different, that they can't actually play what they've actually done on the record. And I know that I always try to give as much as I can in a performance like that…

"The biggest part for me is to hear a band, their sound. I don't care if they're jumping around on stage or running or they're acrobats or whatever. I mean, I would love if I could do some backflips, but…"

Asked in a recent interview with Russia's Classic Rock magazine whether it was ironic that the the 2001 Warner Bros. movie "Rock Star" — starring Mark Wahlberg as a salesman-turned-rock star styled after Owens, who fronted a JUDAS PRIEST cover band before being tapped to become the new lead singer of the actual group — became almost prophetic in the sense that Wahlberg's character in the film ends up playing small clubs with his own material after the band's original lead singer rejoins the group, Owens said: "For me, the movie was almost [like real life]. Rob came back [to JUDAS PRIEST], which was good for me, to be honest. My career, I went on to do a lot of stuff. It was better for the band, it was better for Rob. So it was kind of funny. I think I became a little bit bigger than the coffee shop singer that Mark Wahlberg was in the movie in the end, just playing there. I still get to play in front of thousands of people in Russia. But it is similar how he went on to do his own thing."

In a 2012 interview with Loud magazine, Owens stated about his departure from JUDAS PRIEST: "Well, you know, we all knew that Rob would come back eventually. That was a given. I love the guys in PRIEST, and if there's anything where I look back and wish, 'Oh, man, I wish it could have worked out,' that would probably be it. I was glad to see Rob come back, [but] I do wish they would play some of my material when they're out there [on the road]."