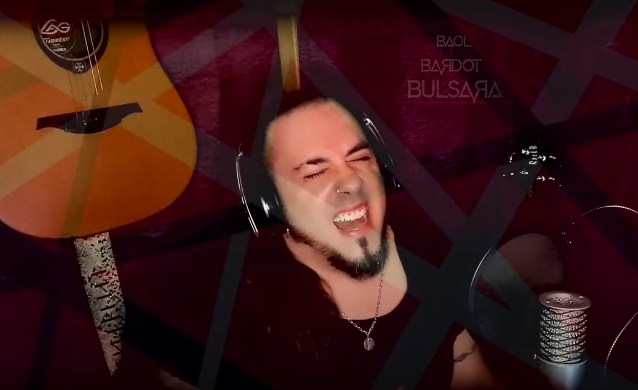 Baol Bardot Bulsara, the Spanish-born lead singer of the veteran Norwegian rock band TNT, has released an acoustic cover of a classic VAN HALEN song in tribute to Eddie Van Halen, who died on October 6 after a long battle with cancer. His choice was "Dreams", a track from VAN HALEN's "5150" album, which was the first music he heard from the legendary Southern California rock act as a teenager. Baol arranged and recorded all instruments and vocals at his studio in Madrid, Spain.

Bulsara states: "Well, as much as I love this song since forever, I wish I didn't ever have a 'reason' to record it now.

"This is a simplified recording, quite basic, since I have no firework-guitar skills at all. But that was neither the intention for it.

"Eddie was not only a terrific and pioneer guitarist, it was also about the songs! And this one, in my ears, is THE song. So my rendition is to your music.

Due to the fact that TNT is unable to play shows amid the coronavirus pandemic, Bulsara is currently working on his new solo project, which he plans to release before the end of the year. This will be an international project, featuring musicians from the U.K. and Norway. It is being recorded, mixed and co-produced by LEGADO DE UNA TRAGEDIA's Joaquín Padilla at Estudios Espartanos in Madrid.

Baol made his recorded debut with TNT on the band's latest album, "XIII", which was released in June 2018 via Frontiers Music Srl. The band's 13th studio album to date features founding members Ronni Le Tekrø (guitar) and Diesel Dahl (drums) alongside bassist Ove Husemoen and Bulsara.

In a 2018 interview with Tom Leu of "Sound Matters", Le Tekrø stated about Bulsara: "What a find! We wanted an unknown singer and really went into the underground to try to find this guy that could sing the classics, like [former vocalist] Tony Harnell sang them, yet be a part of the creative process and create new, modern TNT music.

"Let me tell you, I'm really impressed by the personality. And he acts like a true star, too, offstage, so I like that. So this guy is cocky and he's got all the elements."