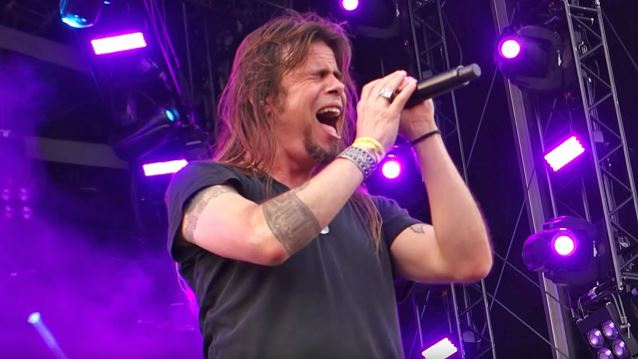 TODD LA TORRE: QUEENSRŸCHE Is 'Way Happier With GEOFF TATE Gone And Me In The Band'

Metal Wani's Jake Patton recently conducted an interview with QUEENSRŸCHE singer Todd La Torre. You can now listen to the chat below. A couple of excerpts follow (transcribed by BLABBERMOUTH.NET).

Todd: "We're constantly touring throughout the entire year. People always say, 'When do you get off tour?' And it's like, well, never. There's little pockets of time when you're home and then you go out for a couple of weeks and then you're out again for a month, and it's just a never-ending thing. The industry has changed so much that bands have to tour to earn, really, a living. And so you have everyone out there touring, and it's kind of a saturated thing. But, thankfully for QUEENSRŸCHE, it's a band that's more than established, and right now it's a matter of rebuilding the band and the brand and proving to people one show at a time that the band is just as good with the new lineup, and in my opinion, the band is better than the band's been in the last decade. The music is better, and the original songs we're playing true to form — we're not downtuning. I don't have trouble singing the songs, so it's not like the guys have to downtune to accommodate for my voice or anything. So everything is kind of right where we want it to be."

On how he integrated into QUEENSRŸCHE after joining the band almost four and a half years ago:

Todd: "When I first joined the band, I knew that I was gonna have a bullseye on me. But I already went through that with CRIMSON GLORY. The difference is that the original vocalist of CRIMSON GLORY [Midnight] passed away, and so there was never any possibility of him coming back. Obviously, Geoff Tate is alive and well and does his own thing, and so the purists might wish that it was the original band again. But the fact of the matter is the band is sounding better than it did for over ten years. The fans have certainly voiced that opinion. That's my opinion, and that's a lot of opinions we hear every night. And the energy of the other members of the band is way healthier, way happier with [Geoff] gone and me in the band. And that's just the facts. There's no stifled creativity, and there's no kind of leader and followers, if you will, in the band. We all talk and try to make decisions the same, and it's very democratic. I'm never gonna tell Michael Wilton that his guitar riff is too heavy, for example, and that had happened in the past. The band is way happier, and I think that it's evident when you watch a live show — not [a clip on] YouTube, but really go to a show and feel what's happening and see what's happening. These guys are happy again and they feel like it's a rebirth of the band and that those dark clouds are well behind them. I've been in the band four and a half years, approximately. I've had two records that were, I think, well received, so I'm more than thankful and honored and happy with what I've been able to do in the band in a short period of time. I try to consider it the quality of what I'm able to bring to the band versus the quantity."

On QUEENSRŸCHE's plans to write and record the follow-up to 2015's "Condition Hüman" album:

Todd: "Yeah, there's some new demo song ideas floating around among the guys. In fact, before we leaves the States [for the Australian tour], I'll be recording some rough demo vocals for maybe three or four new song ideas. So, yeah, there's stuff being worked on…. I would say [it will probably be out in] late 2017. It could be mid-year, but I would say, you know… It's probably safer to say mid-to-late next year."

QUEENSRŸCHE will embark on a month-long headlining tour of the United States in November. Support on the trek will come from ARMORED SAINT and MIDNIGHT ETERNAL.