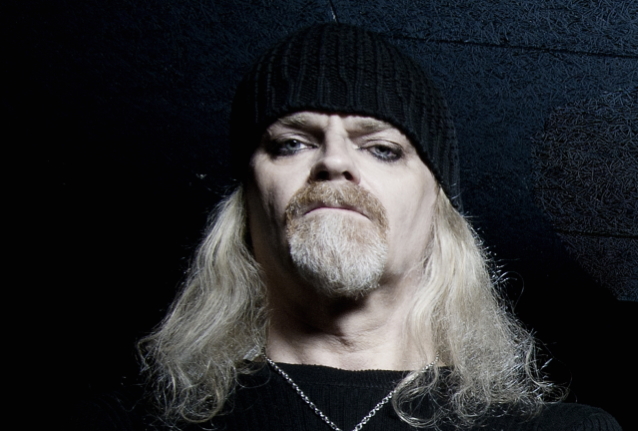 In a new interview with Italy's Poisoned Rock, CELTIC FROST mainman Tom Gabriel Fischer (a.k.a. Tom Warrior) reflected on the band's much-maligned 1988 album "Cold Lake", an effort he entirely regrets making because of its glam-rock tendencies.

"'Cold Lake' is just a complete failure," he said (see video below). "When we formed CELTIC FROST, we wanted to be very experimental, we wanted to be very courageous, we didn't wanna be afraid of taking a chance. On the other hand, that doesn't guarantee to you that you always do something good. And I think 'Cold Lake' is a monumental failure. We tried a different thing, we tried to do something melodic, but I think in the context of the late 1980s, bands really lost their plot, they lost their path, and I think CELTIC FROST was one of those bands. The album no longer sounds like CELTIC FROST, it no longer has the depth and seriousness that CELTIC FROST had. And it didn't have the sound. There was also different people involved, and I think all these things contribute that the album is really the low point of the entire career of CELTIC FROST. It was an experiment, but it was a bad experiment. It was a failed experiment. I think the album is an embarrassment — it's an artistic embarrassment."

"Monotheist" was CELTIC FROST's first LP to to enter the national Swiss chart. The group's first album in 13 years sold just under 2,500 copies in the United States in its first week of release, according to Nielsen SoundScan.

Three and a half years ago, Fischer denounced BMG's reissues of CELTIC FROST's seminal Noise Records catalog. The reissues included four out of five of the band's Noise-era studio albums: "Morbid Tales", "To Mega Therion", "Into The Pandemonium" and "Vanity/Nemesis". The albums were reissued on deluxe hardback CD and 180-gram double album sets, complete with posters and 10-inch spine bound book. All tracks were fully remastered and releases contained previously unreleased and rare tracks.

Former CELTIC FROST bassist Martin Eric Ain died in October 2017 after suffering a heart attack at the age of 50.

Ain handled lead vocals on the song "A Dying God Coming Into Human Flesh" on "Monotheist".