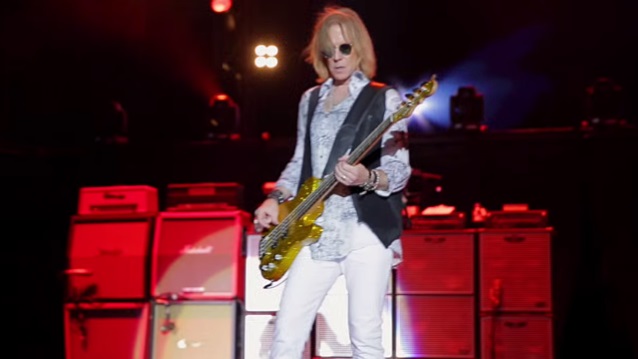 TOM HAMILTON: 'AEROSMITH Still Has A Way To Go Before We Completely Finish'

During a brand new interview with EonMusic, AEROSMITH bassist Tom Hamilton was asked about the band's current status, a little over a month it was announced that the group would embark on a farewell tour in 2017.

"Well, things have been on hold and I think they're about to not be on hold over the next few months," he said. "We have a show, a festival we're doing in September out [on the] West [Coast], and then we have a South American tour in October and then a few months later we'll start what we're thinking of as pretty much our last conventional AEROSMITH tour. Who knows how long that will go? This band still has a lot of shows in 'em. AEROSMITH still has a way to go before we completely finish."

AEROSMITH guitarist Joe Perry recently told Guitar World magazine that the band's final tour "could go on for two years." He added: "There are still a lot of places we haven't played yet that we want to play."

Hamilton is currently on the road with THIN LIZZY as part of a tour to commemorate the 30th anniversary of the death of the band's frontman Phil Lynott and to celebrate 40 years since the release of the "Jailbreak" album.