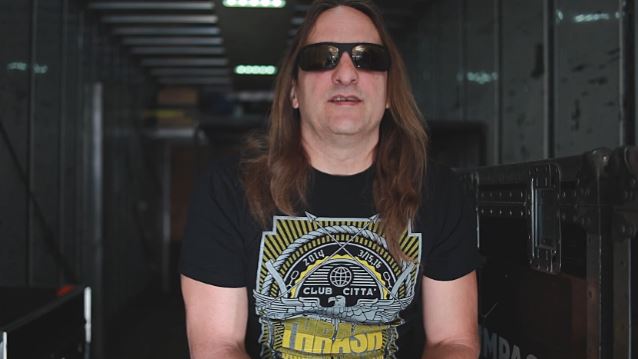 Howie D. from Hard Edge Radio and National Rock Review conducted an interview with drummer Tom Hunting of San Francisco Bay Area thrashers EXODUS before the band's November 28 concert with KING DIAMOND at The Fillmore in Detroit, Michigan. You can now listen to the chat using the audio player below. A couple of excerpts follow (transcribed by BLABBERMOUTH.NET).

"We need to sit down and talk about it. I think we'll probably get together and jam and write some new stuff and refine the new stuff. And in the meantime, maybe work on a live [DVD and CD] — something with Zetro [Steve Souza, current EXODUS frontman] singing on the [former EXODUS frontman Rob] Dukes-era stuff, and make it a nice package with lots of songs and a documentary to go with it; some behind-the-scenes stuff. It's a been a while. We haven't done nothing live since '97. Well, we did the 'Shovel Headed Tour Machine' [DVD in 2010]. But, yeah, we need to do something like that. And write some new material."

On how long EXODUS can keep going:

"Personally, I haven't really put a timeline on that. I look at those goals as kind of increments at this point. Like, 'Let's work on this new record.' I have a saying, when everybody's, like, 'My back hurts,' or, 'My knee hurts,' [I tell them], 'We're a lot closer to here where it ends than there where it started.' You know, there's a finite amount of years we have left to do this. We just want it to be good, and if it ceases to become good and fun, then we'll probably pull the plug. But we're having a good time right now, so I don't see immediate-future shutdowns. [Laughs]"

"Blood In Blood Out" is EXODUS' first album since the departure of the band's lead singer of nine years, Rob Dukes, and the return of Steve "Zetro" Souza, who previously fronted EXODUS from 1986 to 1993 and from 2002 to 2004.