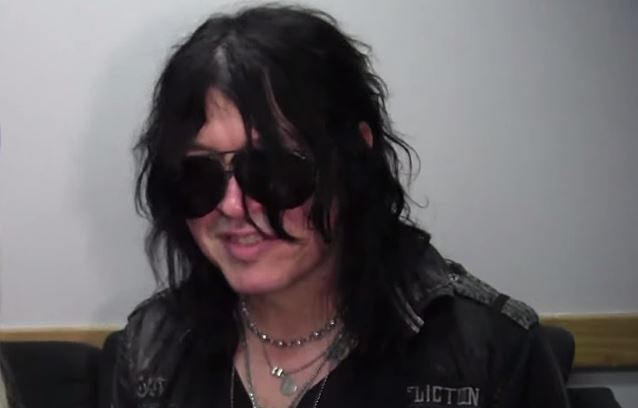 On August 15, Sally Steele of Vegas Rocks! Magazine conducted an interview with CINDERELLA frontman Tom Keifer at the Cathouse Live At Irvine Meadows festival in Irvine, California. You can now watch the chat below. A couple of excerpts follow (transcribed by BLABBERMOUTH.NET).

On AEROSMITH singer Steven Tyler's recent statement that "country is the new rock and roll":

"Well, I wouldn't go that far. I live in Nashville, so I'm surrounded by it. I think that I see a lot of influence, fashion-wise, and some of the intensity of the '80s rock, a lot of those styles, and some of the production elements and stuff on the records, I see some of that stuff being incorporated into country records these days and country live shows. But it's still not rock music; it's a… You know, they're just kind of bringing in an element of music that, possibly, they grew up on or liked or admired, and I think it's very cool. But I wouldn't say it's the new rock. I mean, there's still rock bands out there that are playing rock music, and I think country's bringing in a rock element to it. So, that would be my take on it."

On Tyler's country solo single, "Love Is Your Name":

"Well, I think that… I heard the song and the video, and I think it's a beautiful song, and I think that he's suited to that, because AEROSMITH have so much roots in their music. Particularly, a lot of people don't realize how much of that mountain bluegrass kind of harmony and melody is in a lot of AEROSMITH's music. So, to me, when I listen to the song, it sounded very natural for Steven Tyler. So, he's definitely a talented person and someone who can pull that off. I think it's great."

Keifer's debut solo album, "The Way Life Goes", sold 5,400 copies in the United States in its first week of release to land at position No. 78 on The Billboard 200 chart. The CD was released on in April 2013 via Merovee Records (through Warner Music Group's Independent Label Group).