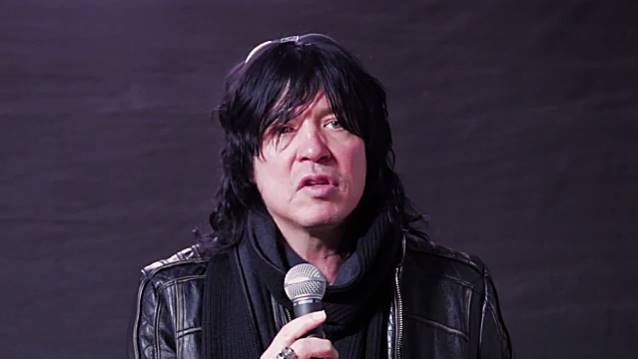 CINDERELLA frontman Tom Keifer was interviewed by Canadian rock journalist Mitch Lafon for a recent edition of the "One On One With Mitch Lafon" podcast (Facebook page). You can now listen to the chat using the Spreaker widget below. A couple of excerpts follow (transcribed by BLABBERMOUTH.NET).

"I mean, the only thing I can say about that right now is there's no discussions or talks for anything in the future with CINDERELLA right now."

On when fans can expect to see the follow-up to Keifer's 2013 solo album, "The Way Life Goes":

"It's hard to say, because I take things one day at a time… I will say last year I started writing again, and it had been a while since I'd really written anything, because this record took so long and it was such a labor of love. You just kind of feel burnt when you spend a lot of time on a record, between the writing and the producing. So I always need to get away from it for a while. So, being on the road, playing some new music and actually getting response to it, and people accepting it is a good thing for you after you go through struggling to make a record. So that's been a positive thing. I kind of got inspired last year and started writing again. So I'm far from having a record complete, and I wanna collaborate with some other writers and stuff again, like I did with this record, but, so far, the process has started with me just writing myself… with a couple of other people too. But I haven't really dove back into the deep end of writing yet, but I'm getting there. And that switch can turn on very quickly, so that's why I say it's hard to say when. Right now we're kind of in it up to our eyes with touring and still promoting this and staying on top of keeping this vital, because it's something we still really believe in."

On how his voice is doing more than two decades after he was told that he would never sing again as a result of a partially paralyzed left vocal cord:

"The voice is as strong as ever now, but that said, the root problem, or the root cause of all the problems I had was a neurological condition that I was hit with in the early '90s. It's called a paresis, which is a fancy medical term for a partial paralysis. So I had a left-vocal-cord paralysis, which there's no cure for, medically — surgery or medicine, there's nothing they can do to cure it. And I was told I would never sing again. So it's a really serious thing to happen to a singer. And most people who get it don't sing again. And the doctor who delivered that news to me told me that if I had any prayer or chance of singing again that I would have to start working with speech pathologists and vocal coaches and try to retrain the vocal cord to respond properly. So, long story short, after years of battling and going to every which doctor, vocal coach, everything, trying to figure out how to get around this lame cord, I finally… Over the years, it's gotten stronger and stronger, and now it's probably as strong, on a good night, or stronger, than it's ever been. But that said, the condition's still there. So I have to do these exercises every day that take an hour and a half of therapy and exercises to keep it strong and remind that cord, because the root problem of it wanting to not work properly will always be there. But I found a workout routine for it that keeps it working. But I have to do it every day. Even on a show day, my warmups and therapy are probably as long as the show… It's still challenging. People come and hear me sing now, and they say, 'You sound better than ever,' and I'm so grateful to hear that. But it's not without a lot of effort each day and it's still not without a lot of risk, because when you sing with that kind of intensity and you're singing on something that has an inherent weakness… I pray a lot. [Laughs]"