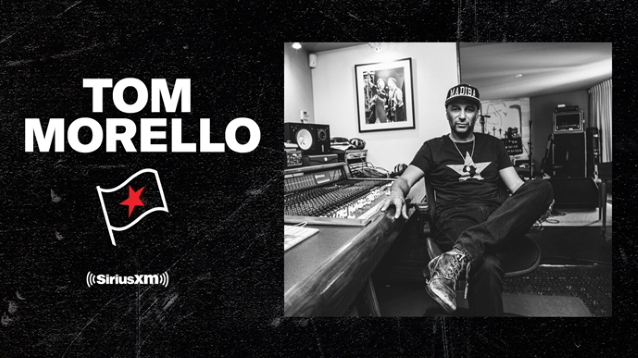 TOM MORELLO Partners With SiriusXM For His Streaming Channels, Weekly Show And Podcast

The content hand-crafted by Morello includes streaming music channels that are part of SiriusXM's Xtra Channels offering, which has expanded even more since its debut of 100 curated music channels in early 2019. Morello's music channels will amplify the intersection where music and activism collide, a wide range of heavy metal music, and will explore his personal influences and musical collection.

"When SiriusXM approached me about doing a new slate of shows, I only had one condition: I say what I wanna say and I play what I wanna play," said Morello. "When the right combination of rhythm and rhyme washes over a huge throng or transmits through an ear bud it can provide a spark for action or a life raft for survival. Music MATTERS. And I'm very much looking forward to inflicting on listeners the music that matters to me."

"We are more than excited for Tom to bring his unique and respected voice in both music and activism across multiple platforms to our listeners," said Scott Greenstein, president and chief content officer, SiriusXM. "SiriusXM offers artists, such as Tom, the flexibility to express their creativity through live radio, streaming, and podcasts, across our distinct, but coordinated services including SiriusXM, Pandora and Stitcher."

Tom Morello's Battle Hymns Radio (ch. 1124) will thread the needle between music and activism throughout history and genres. The channel will provide an audio assault of rebel anthems featuring the freedom songs of the 1960s, the hip hop music that has been standing up for black lives for decades, and the mosh pit-inciting, radically raging rock.

SiriusXM's E Street Radio will debut "Tom Morello's Radio Comandante", a weekly show dedicated to a new musical theme, featuring a collection of wildly diverse songs that have influenced him as an artist. Each week his show will air on a SiriusXM channel that suits the current show's theme. The premiere show of "Tom Morello's Radio Comandante" will focus on the theme of American class consciousness and examine the 80-year history behind Bruce Springsteen's song "The Ghost Of Tom Joad". The show will air Tuesday, March 2 at 10 a.m. ET and 4 p.m. ET on channel 20, with replays throughout the week.

This is Morello's second weekly show on SiriusXM, following the incredible success of "Tom Morello's One Man Revolution" on SiriusXM's Lithium channel, where Morello shares stories spanning his 30-year career as a groundbreaking artist, while taking listeners on a fearless exploration through '90s alternative & grunge music that ignited a revolution. "Tom Morello's One Man Revolution" airs every Monday at 4 p.m. ET on channel 34.

Adding to the latest array and launch of SiriusXM's original, exclusive and popular podcasts is "Tom Morello's Maximum Firepower", which will be available on the SiriusXM app, Pandora, Stitcher, and wherever listeners access their podcasts, beginning Wednesday March 3 and air weekly on SiriusXM's Volume, channel 106 every Wednesday at 1:30 p.m. ET, also beginning on March 3. This SiriusXM original weekly podcast will focus on the music, the moments, and the movements that have shaped Tom's worldview and left an indelible mark on him as an artist and activist.

For all information on Tom Morello's Xtra channels, shows and podcast, go to this location.

Subscribers are able to listen online, on-the-go with the SiriusXM mobile app, and at home on a wide variety of connected devices including smart TVs, devices with Amazon Alexa or the Google Assistant, Apple TV, PlayStation, Roku, Sonos speakers and more.