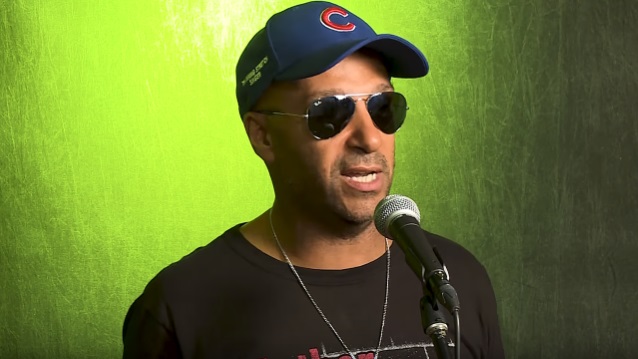 TOM MORELLO 'Wasn't Down' With 'Misogynist' And 'Quasi-Devil-Worshipping' Message Of MÖTLEY CRÜE And AC/DC, But Loved Their Music

PROPHETS OF RAGE, the supergroup featuring members of RAGE AGAINST THE MACHINE, PUBLIC ENEMY and CYPRESS HILL, was recently interviewed by HardDrive Radio. You can now watch the chat in two parts below.

PROPHETS OF RAGE guitarist Tom Morello, who has been extremely critical and outspoken about Donald Trump's presidency, was asked about more right-leaning rockers like Ted Nugent and Kid Rock and whether it's possible to like an artist's music and not like the person making it.

"I'm a fan of Ted Nugent's music and Kid Rock's music and I like both of them as people; I consider them both friends," Tom responded. "They're people I may not agree with, if we had a checklist of stuff, but they're both good, decent people and I'm proud to be friends with both of them.

"There's certainly no litmus test — and neither was there with RAGE AGAINST THE MACHINE and certainly there isn't with PROPHETS OF RAGE — you don't have to be down with the message to enjoy… there's a place for you in the pit," he continued.

"Every day somebody comes up to me and says, 'I was drawn to your band' — normally RAGE [AGAINST THE MACHINE] — 'I was drawn to your band because of the aggression and because it was powerful rock and roll, angry music, and I was exposed to ideas that I'd never heard in any of the other music that I'd listened to, and it changed my life.' I hear that every single day. People who… they became university professors or they became lawyers that defended homeless people or they became brick-throwing anti-fascists, in part because a set of ideas that did not exist in mainstream culture was introduced to them because the band rocked so fucking good.

"This is not a college culture," Tom added. "I love Noam Chomsky, but I don't wanna mosh to him. So the first we have to do is make records that kick your ass, play shows that kick your ass, and then some of those in that audience may respond to the lyrical content or what the band's ideology is.

"I was a huge fan of bands like MÖTLEY CRÜE and AC/DC, and the lyrical content was super misogynist on the one hand and sort of quasi-devil-worshipping on the other, and I was neither down with women-hating or the devil, and yet I loved those bands; they were super rocking."

PROPHETS OF RAGE's self-titled debut LP was released in September

The group, which plays songs from RAGE, PUBLIC ENEMY and CYPRESS in addition to original material, made its live debut in May 2016 in Los Angeles.