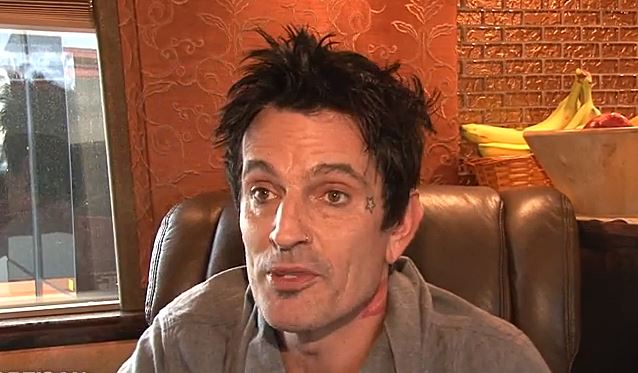 "Hey @BLABBERMOUTHNET Whats if feel like to be the worst site ever? Yeah its me again and ya'll still suck ass!!" He added: "Oh yeah and bring on the haters....i mean admirers!!!"

Back in February 2012, Lee was similarly enthused about BLABBERMOUTH.NET, writing on his Twitter account: "@BLABBERMOUTHNET has got to be THE WORST music site ever! maybe its not the site but the assholes that post there!"

In January 2011, Lee posted a message on Twitter congratulating BLINK-182 drummer and hip-hop producer Travis Barker on the release of his album, "Give The Drummer Some", and slamming BLABBERMOUTH.NET "haters" who made comments that were critical of the CD's musical content and cover artwork. Lee wrote, "Travis! Congrats on the new CD and [by the way]... FUCK all the haters at Blabbermouth.com [sic]. They can suck it! They did the same shit to me!"

MÖTLEY CRÜE kicked off its second residency at The Joint at Hard Rock Hotel & Casino in Las Vegas on September 18. The fall shows, dubbed "Evening In Hell", are an all-new production designed exclusively for The Joint in partnership with AEG Live.

"A Public Disservice Announcement", the latest album from Lee's METHODS OF MAYHEM project, sold 2,900 copies in the United States in its first week of release to debut at position No. 153 on The Billboard 200 chart. The CD was released in September 2010 via Loud & Proud Records, a Roadrunner Records imprint focusing on established artists.