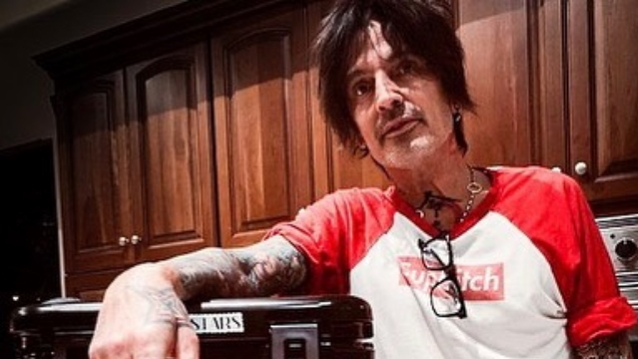 According to TMZ, MÖTLEY CRÜE drummer Tommy Lee's house in Calabasas, California, which he has been trying to sell for the last few years, has been burglarized.

Police alerted the drummer there had been a break-in at the home last week, according to the site. Someone got in through a back glass door, and broke glass, lamps and even one of Tommy's side gates. However, the only things that were stolen were a bathroom mirror and some cabinet handles. The total damage/loss for Lee is estimated to be only around $5,000.

The drummer purchased the home in 2007 for $5.85 million, according to property records.

Official description of the house courtesy of agent Emil Hartoonian of The Agency: "Set atop a spectacular hillside against the extended city light views lies this architectural compound which brings the perfect balance of a tropical escape and artistic functionality. A lush central atrium with natural tropic open to the sky with a retractable roof illumines natural light throughout. Uniquely modeled with the flow and scale far and wide. A spacious chef's kitchen with center island, stainless steel appliances and granite counters. Entertainers living and dining room, a spacious office/library with a private terrace. The main level Master Suite with personalized tranquility, large scale glass doors slide open to the beautiful outdoor space with a private pool and spa overlooking the city views. A large walk-in closet generously scaled for ample space to both his and hers adjacent to a beautifully appointed master spa. The lower level offers a true compound made for imagination, creativity and inspiration. A professional recording studio skillfully engineered with isolation booths and a control room. Adjacent is a home screening room and personal concession bar as well as lower-level dining and wine tasting quarters. Lower level garage parking and ample storage. This magnificent compound is truly a unique offering for the creative lifestyle it demands."

A 2020 video tour of the house is available in the YouTube clip below.