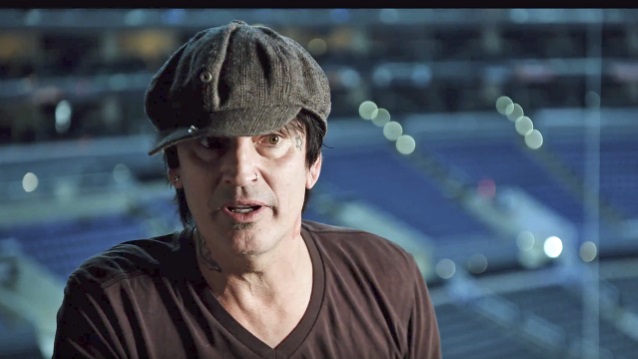 Brandon Lee, the 22-year-old son of MÖTLEY CRÜE drummer Tommy Lee, has offered to pay for his father's rehab, less than a day after Tommy took another swipe at Brandon on social media. After Brandon shared some of their turbulent recent history — even revealing that Tommy did not call his son for his birthday on June 5 — Tommy posted a tweet in which he tallied up the costs of various things in Brandon's life he paid for, including a stint in rehab.

Tommy tweeted: "Rehab for son: $130,000...Party for son's 21st birthday last year: $40,000...Medical Bills after son knocks his father unconscious and uses 'alcoholism' as scapegoat: $10,000...Son acting like a victim on social media on father's day: Priceless." He then posted an image signifying a mic drop.

Brandon himself responded on Instagram Tuesday afternoon, writing: "I thank my Dad for paying for my treatment. It's the best thing he's ever done for me. Today I am almost two years sober. Every day that goes by I feel ever more grateful. My clear mind has allowed me to do a lot with this time. So much so that I would like to offer to pay for his treatment."

This all began last Sunday when Tommy took to Instagram to honor his dad, while remarking on his own failures as a father. He wrote in part: "Sometimes I feel like I failed as a father, because my kids don't know the value of things . . . I love my boys but they can be assholes too and that's the truth (Cue Honest Guy music)."

Brandon later fired back: "You gotta show up to be a Dad big guy. If you think we're so bad (which I can assure you we are not) then you should have showed up to a few more BDays and baseball games." A follow-up post, later removed, contained a video of an unconscious Tommy lying on the floor in a T-shirt and underwear — the footage apparently taken during the alleged March brawl between father and son when Brandon allegedly assaulted his father at Tommy's home in Calabasas, California.

At the time of the March incident, Brandon released a statement to People, in which he claimed his father is battling alcoholism and that he had worked "tirelessly organizing an intervention."

"I wanted my dad's hopeful sobriety and recovery to be a private family matter but, as a result of his accusations on social media, I feel forced to speak out," Brandon said in the statement. "I have and will continue to cooperate with law enforcement as needed. I love my father and just want to see him sober, happy and healthy."

Tommy denied the allegations the same day, tweeting: "I'm happier than I've been in my entire life. I have a few drinks here & there because I'm fuckin' retired and enjoying my life. I worked 30+ fuckin' years I deserve it. You didn't arrange any intervention, you barely spoke to me while u were here."