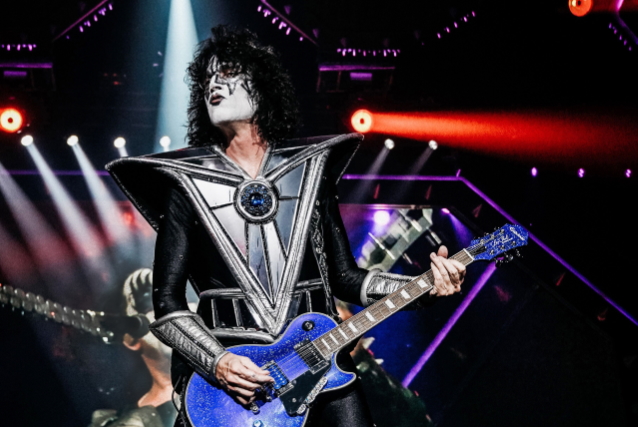 During the question-and-answer portion of "An Evening With Tommy Thayer" on February 23 at the Outtakes Bar & Grill in New Hope, Minnesota, KISS guitarist Tommy Thayer was asked what his plans are for after the band completes its "End Of The Road" farewell tour in July 2021. He responded (see video below): "I get asked that question a lot in interviews these days. I don't really know. We've got about another year and a half to go on this tour. I'm sure most people here know we're on the 'End Of The Road' world tour right now. This tour started about a year ago, and we've got about a year and a half to go. The last show's gonna be July 17, 2021 in New York City. So I don't really know exactly what my plans are at the end of this. KISS is not gonna go away, though, either. The band is not gonna tour, but the KISS music, the identities and the characters and the brand and the merchandise, that will all continue on. I think that KISS will continue on in some way. I can't imagine it not."

Three years ago, Thayer told The Aquarian Weekly that he wasn't bothered by the fact that a small segment of KISS's fanbase can't accept him performing in the "Spaceman" makeup and attire, even though he has been working with KISS for decades and been the group's lead guitarist for more than 15 years. "You can't be fooled by a handful people that go on web sites and complain," he said. "Some people complain about everything, really, not just who's the guitar player. In that context, it doesn't really mean anything to me. If anything, I chuckle and smile when I hear things like that. It really has nothing to do with what's happening in reality. Put it this way: KISS continues to go out and play big shows and be the phenomenon that it is. I give more merit to that fact, than what a few oddballs say online. I don't really care."

In 2014, Frehley spoke out against Thayer in an interview, describing him as "just a guy up there copying me and trying to move like me and trying to sing like me and trying to play like me." But Thayer declined to fire back at Frehley, telling Australia's The Herald: "I don't want to get into a back-and-forth, but I'm sure you can kind of assess what you think when you hear all that." He continued: "I think [Ace] had every opportunity in the world to continue in KISS and be in KISS as long as he did the right thing, but it worked out better for me and he has to lead his life. As far as the jabs and all that, he can say that stuff and I'm not going to say anything bad about him."

KISS's current lineup consists of original members Paul Stanley and Gene Simmons, alongside later band additions, Thayer and drummer Eric Singer (on and off since 1991).

Formed in 1973 by Stanley, Simmons, Frehley and drummer Peter Criss, KISS staged its first "farewell" tour in 2000, the last to feature the group's original lineup.