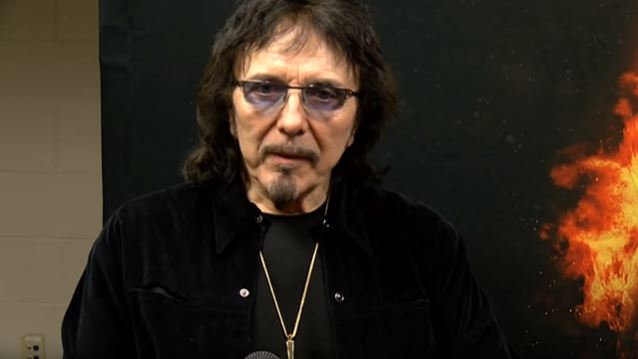 Tony was on hand at Birmingham, England's Opus Restaurant to entertain guests with stories from his life and career with BLACK SABBATH, touring the world with one of the biggest bands of all time.

Asked if BLACK SABBATH will ever play again after completing its "The End" tour last year, Iommi said (see video below): "It's highly unlikely, but we may. You can never say never, because we've done it… So many times, you say, 'Oh, that's it now,' with different singers and different this and that. And all of a sudden, we're playing together again. I would hope we could do some one-offs, but we'll never tour the world again as we did, because it really is exhausting."

He continued: "People think, 'What a great life,' and it is a great life, but it takes its toll on your body. All the traveling at different hours of the day and night. You finish a show at 11 o'clock. We'd base ourselves in one place, like New York or wherever we were, and then we'd stay in New York for 10 days, fly out and do a show and fly back in the night. So by the time you get to the hotel, it's four o'clock or five o'clock [in the morning]. And you can't sleep. And that's the difficult part. Even though you travel the best way you can. We had a great plane, we had great hotels — everything was marvelous — but it's still tiring."

He added: "I think when you get to our age, it changes from when we're 20. [Back in those days] we could stay up all night. But now I'm 30 [audience laughs], and it's a different thing. It's hard. And, of course, with us, we didn't see each other that much, because everybody had their own space and we'd stay in the room. We'd get [to the hotel] after the show and go to our rooms. So you get to your room, put the TV on, watch something till five o'clock or whatever it might be, and then fall asleep. And then you'd arrange to see each other for breakfast occasionally. But it didn't happen too often. We sort of became more… Everybody wanted their own space. Ozzy [Osbourne] had room service, I had room service, Geezer [Butler] got room service, and before you knew it, we wouldn't see [anyone] at all until the following day. We'd do a day on, day off. So you're sitting in your room [and thinking], 'What do I do now?'

"I was going out walking with a security guard, because none of the other guys wanted to go out for a walk," Iommi said. "And I'd be the only one in the bar, because everybody else was recovering alcoholics. That's sort of how it went. Twenty years ago, we'd all be in the bar and talk about the band and what we were gonna do. [That] had all gone. The only time we'd get a chance to talk [on the last tour] was on the flights or on stage at the gig. Me and Oz would have a conversation between the set on tour, which is ironic. [We'd say to each other] 'What did you do last night?' And there's, like, thirty thousand people out there. But that's the way it had gone."

Iommi was diagnosed with lymphoma in early 2012, shortly after SABBATH announced a reunion tour and album. He underwent treatment throughout the recording of the disc, titled "13", and the subsequent tour to promote it.

Asked how his health is at the moment, Iommi said: "I'm feeling good, dare I say. And I always have to say that, 'cause I'll probably drop dead when I walk out of here. But I feel fine at the moment. [My doctor Shankara] Paneesha keeps on top of it, as he does with all his patients. I'd heard so many good things about him, and they were all true. He's helped me a lot."

Tony is Patron of Ward 19, the dedicated cancer ward at Heartlands Hospital and is supporting the charity's campaign to raise £150,000 for an extension of cancer services at Solihull Hospital.

This unit will increase the amount of cancer patients who can be treated by 170 percent, reducing waiting times, reducing stess and creating a calm and relaxing atmosphere for patients.

Tony told Birmingham Live: "The first time I went to Ward 19 at Heartlands was when I went with a friend who was going for chemotherapy for his first treatment. It's something I'd been through before, so he wanted to go along with him for support. You can be anxious going to hospital for treatment for the first time, so it's really important to have a welcoming place to visit. That's when I was approached about being a patron of Heartlands and, after seeing the amazing work they do at the chemotherapy center, I accepted."

Iommi said in 2016 interview that "the lowest moment" for him was being diagnosed. He explained: "You automatically wind yourself up saying, 'That's it then,' but that is not always the case. When they tell you, you think, 'Oh God.' That was a low time. I have had a few low times in my life like everybody has, but that was one that stuck in the head."

Many thanks to everyone who came to the lunch yesterday, you raised over £23,000! The money will go towards equipping...