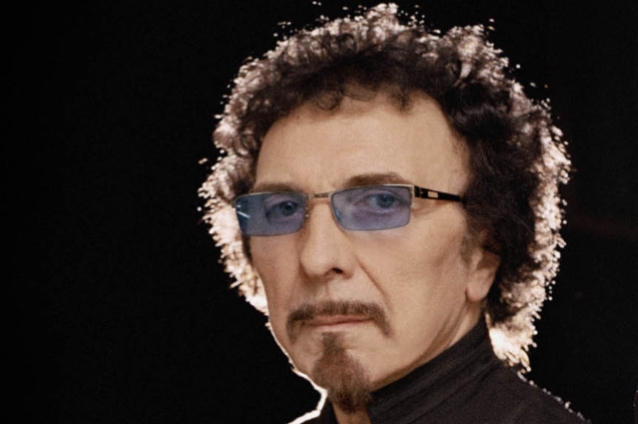 TONY IOMMI Looks Back On 2019: 'It's Been An Interesting Year For Me And BLACK SABBATH'

BLACK SABBATH guitar legend Tony Iommi has posted his annual end-of-year/holiday greeting video in which he looked back on some of the highlights of 2019.

He said: "Hello, here we are again. Another Christmas. And here I am, wearing a BLACK SABBATH Christmas sweater. How about that?

"Well, it's been an interesting year for me and SABBATH. We started off at the beginning of the year getting a Grammy award, a 'Lifetime Achievement' award, which is brilliant — I mean, it's really great; it's the highest award you can have, Grammy-wise. And then, a few months afterwards, or a month afterwards, I went to Armenia with Ian Gillan [of DEEP PURPLE] for the 30th anniversary of the Rock Aid Armenia, which was fabulous. We had a great time there. We went to visit the school that we built, and that was lovely. And see all the kids and see all the people. They looked after us amazingly. That was so nice. And then, just recently, I went to Nashville, to the Gibson factory. I was invited there by the new owners, who, I've gotta tell you, are great. And they're so enthusiastic — lovely people. And I went around the factory and met all the people that work there, and they're so dedicated to what they do — all of them there now. And the Gibson product is lifted a million times, I tell you. They're so good, and wanna do the best, which is great for guitar players. So, that was lovely.

"But, anyway, I'm here to wish you a very merry Christmas and a really happy new year. Have a great year, and I'll look forward to seeing you next year."

This past June, Butler told Classic Rock magazine that he wasn't opposed to a a one-off BLACK SABBATH reunion. "If it came up, I wouldn't say never," the bassist said. "I can't imagine it ever happening, but then I said that about the SABBATH tour, and it happened, so who am I to know?"

I wish you a very Merry Christmas and really happy New Year!