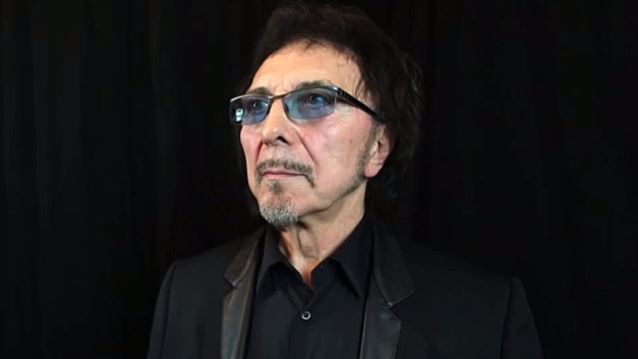 BLACK SABBATH guitarist Tony Iommi has told U.K.'s Q magazine that he would love to make another studio album with the band. He explained: "I've got so many riffs. I wrote a whole load of stuff for another album and we met up in L.A. but the others... well, Geezer [Butler, bass] didn't particularly want to do another album. Then again, after you've just had a No. 1 album, where do you go from there? For the last LP, we did record 16 songs [and only used 11], so we may still put something out from that. We don't know yet. Do I intend to stop playing? No. It's the touring, really [that is difficult]. I'd love to do something with the guys. But, whatever happens, I will do something."

"13", the first SABBATH album in 35 years to feature original SABBATH members Ozzy, Iommi and Butler, topped the Billboard album chart when it arrived in June 2013 — giving the band their first U.S. No. 1 album ever.

Iommi said in a recent interview that BLACK SABBATH's upcoming farewell tour, which will begin in January 2016, is truly its last because he is not physically capable of doing it any longer. Speaking with the Birmingham Mail, Iommi explained, "I can't actually do this anymore. My body won't take it much more."

Iommi, who was diagnosed with lymphoma in 2012 and was treated all through SABBATH's extensive 2013 world tour, admitted that he was worried the rigors of the road could bring the disease back. He revealed: "I don't want that creeping back again, and all the traveling involved in SABBATH tours increasingly takes its toll. That's why we're going out on one last tour, to say our farewells. And then it very definitely is the end. We won't be doing it again."

The legendary guitarist continued: "Don't get me wrong, I still love gigging. It's all the traveling and the exhaustion that goes with it that's the problem. That side of things has a big impact on me… I love being up there onstage, playing with SABBATH. What I don't love is all the other stuff necessary to enable that to happen."

Iommi was also hospitalized recently with back problems, and he still requires blood tests every six weeks to monitor his lymphoma.

The tour kicks off on January 20 in Omaha and will encompass about a year, including breaks.