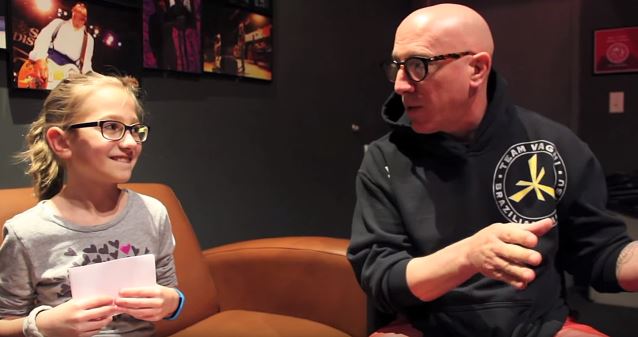 Piper of KidsInterviewBands.com conducted an interview with Maynard James Keenan and Carina Round of PUSCIFER on March 30 at Express Live in Columbus, Ohio. You can now watch the chat below.

PUSCIFER launched the "Money $hot - Round 2" tour on March 17 at the Fox Performing Arts Center in Riverside, California.

PUSCIFER's latest album, "Money $hot", was released on October 30, 2015 via Keenan's Puscifer Entertainment. The album landed at #1 on Billboard's Independent Music chart, #2 on the Alternative Albums chart and #30 on the Top 200. In a four-star review, Revolver magazine described the album as "a meditative and hypnotic — not to mention wholly engaging — offering" and both Crave and Kerrang! placed the release on their year-end, best-of lists, with Crave saying: "The yin and yang of masculine and feminine energy interweave a pulsing eroticism that curls itself around the mind like one of Keenan's many grapevines."