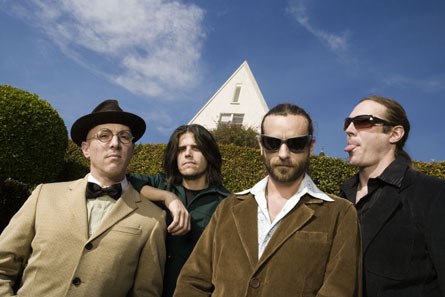 Even though singer Maynard James Keenantold a Chilean radio station earlier in the week that TOOL will not be releasing a new album in 2013, the band's drummer Danny Carey is hopeful that TOOL's next CD could still arrive in the next few months. "Sometime this year … that's all I can say," Carey told New Zealand's The Rock FM regarding a possible release date for the record. "The sooner the better for us. We're working every day but you can never predict it, honestly. We're really excited about it, so I hope all the fans will be too."

Carey also revealed that TOOL has amassed a significant amount of live material for possible future release on CD or DVD. "We have tons of stuff recorded," he said. "I hope we do make that happen one of these days. We have lots of video stuff too, we could do a DVD or two whenever we get around to it. We're kind of trying to focus on the new thing now, so we'll go back at some point and do it."

In a separate interview with David Farrier, Carey spoke about "a big 'Lateralus'-type song" that is being pieced for TOOL's next album. "We're still — believe it or not! — still working on it," he laughed. "It's like an ever-evolving thing. It's probably going to turn into a thing that's, like, a big trilogy type of feel to it, sort of like 'Disposition' and 'Intension' and 'Triad', like on the 'Lateralus' record or something. It will probably be over a 20-minute piece when it's all finished, so it will be a good part of the record. We're dealing with it in sections, but it's coming together really well. We're having lots of fun working on it, that's for sure."

Carey also confirmed that he was the previously unidentified member of TOOL who was recently injured in a scooter crash, pushing back the band's writing and rehearsal sessions. "It's been tough lately because I cracked four ribs, broke three of them on a motorcycle the other day, so I am kinda laid up at this point," he said. "It's making it really painful to play. It's not an easy thing to do. [laughs] It was just over in the San Fernando Valley, I was just turning to go on the freeway, and I think I hit some antifreeze or oil or something, and the wheels just slipped right out from under me, and I just hit the pavement really hard. [laughs] Yeah, I'm still in one piece anyway, but I don't know how lucky I was the way I feel right now. [laughs] It's pretty painful, but some painkillers and some scotch will get you through it."

TOOL hasn't released a new album since 2006's "10,000 Days", although the group has toured intermittently since then.

Keenan and his side act PUSCIFER will release their new EP, "Donkey Punch The Night", on February 19, with some touring to follow.