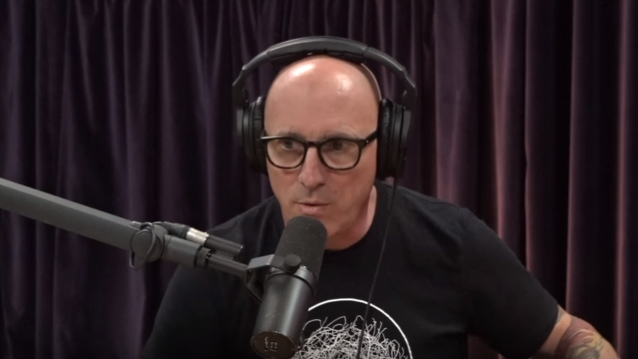 TOOL frontman Maynard James Keenan says that it was a relief to finally be able to the announce that the band's long-awaited fifth studio album, "Fear Inoculum", will arrive on August 30. The name of the LP was unveiled on Monday (July 29) in an Instagram post. The disc will follow up 2006's "10,000 Days".

"Fuck, what a weight lifted off my chest," Keenan told "The Joe Rogan Experience" podcast on Monday (see video below). "It took a lot of work. The four of us are a lot of fucking work just to get anywhere. Oh my God — everything's a fucking committee meeting and always gets shot down."

Asked what specifically caused the delay in the record's completion, he replied: "Success. When you get successful, you think you're right about everything. You're pretty sure as that individual, 'I am right and you are wrong.' I'm successful and we're successful because of me, not because of you.'

Keenan continued: "It's not that bad with us… There's a dynamic of, 'I want this and I've always gotten my way and that's why we're successful, because I don't compromise.'"

A full track list and first single for the LP has yet to be unveiled, although the band has been playing two songs, reportedly titled "Descending" and "Invincible", during its recent live shows. Both tracks are expected to show up on "Fear Inoculum".

The band revealed in a second post that its entire recorded catalog will be available on digital and streaming services beginning this Friday (August 2). All four previous studio LPs and the band's 1992 debut EP, "Opiate", will be available. TOOL was one of the last holdouts in the music business to keep all its music out of the digital realm.

Earlier in the month, TOOL's legendary 1991 demo tape, titled "72826", surfaced on YouTube, Apple Music, Google Play and Pandora. It marked the first time a TOOL release had been available to stream online and led to speculation that the rest of the catalog would follow.