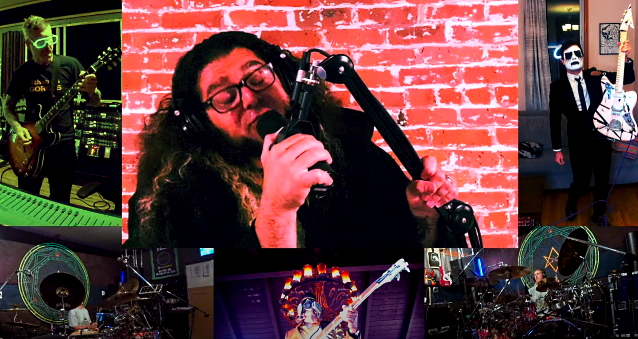 TOOL, PRIMUS, MASTODON And COHEED AND CAMBRIA Members Team Up For Cover Of RUSH's 'Anthem' (Video)

Danny Carey (TOOL),Les Claypool (PRIMUS),Claudio Sanchez (COHEED AND CAMBRIA),Bill Kelliher (MASTODON),Stephen Brodsky (MUTOID MAN, CAVE IN) and Jordan Olds (a.k.a. Gwarsenio Hall) have teamed up to record a quarantine cover version of RUSH's "Anthem" as part of "Two Minutes To Late Night"'s cover series. The video, which was edited by Drew Kaufman, can be seen below.

This past January, Carey spoke about late RUSH drummer Neil Peart's influence on his style backstage after he accepted TOOL's Grammy for "Best Metal Performance". He said: "Neil was so defined and he was such a precise composer in the way he played that that was a big influence on what I wanted to do with the band — to be in a band that did compositions, and it wasn't just jamming and stuff like that. So, luckily, I found the right bandmates to do that with."

Shortly, after Peart's death was made public, COHEED AND CAMBRIA drummer Josh Eppard said in a statement: "Neil was a force. He helped shape so many drummers, young and old, his passing will be felt forever. This is a devastating loss: Our sincere condolences to the Peart family and his RUSH family."

MASTODON's Brann Dailor spoke about RUSH's influence on his playing in an interview with Modern Drummer. He said: "When I was four or five, my mom was in a cover band, and they practiced in our living room. The drummer was her boyfriend, and he was a huge Neil Peart freak. He tried to replicate Neil's drumset, and they did 'Tom Sawyer' and a number of popular RUSH tunes of the day. So that's where it started for me.

"When I became able to start figuring out other drummers' parts, when I was nine or ten, I would give it a shot, but I never come anywhere close. You know, I'd try 'YYZ' or something like that. There were always a couple kids who could play the beginning of it. We'd go over to their house — 'Hey, he knows 'YYZ'! Let's go over there and hear him play it!' [Laughs] You'd end up at some kid's bedroom where there was only a bed and a drumset. The 'YYZ' thing became sort of the standard. If you couldn't do the opening of that, then you weren't even worth mentioning.

"The most inspirational thing to me about Neil Peart is that he was more than 'just' a drummer. His drumming has always been absolutely phenomenal; he's a huge inspiration to millions of players around the world. But there's also something to be said for his lyric writing. Not many drummers contribute in that sense to their groups. There's this thing of, everyone has their place: The singer writes the lyrics, the guitarist writes the songs…. But Neil's an incredibly intelligent human being, and I think he's a good writer. I do the majority of the lyric writing for MASTODON, so knowing that Neil wrote RUSH's lyrics gave me the inspiration to step forward, like, 'I have something to say too.' Vocals can be very percussive in their delivery, especially with heavier music. But even with melodic music, they should weave another rhythm through the song. So it makes sense for a drummer to have some sort of input in that department."