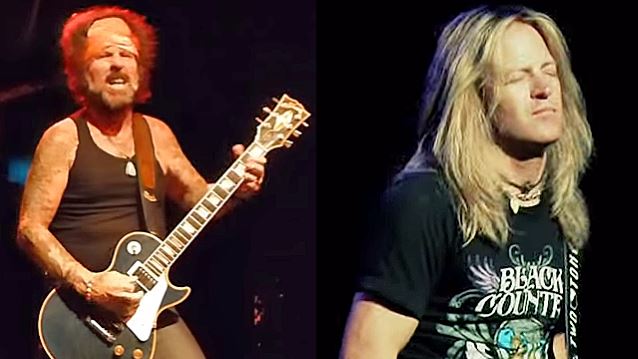 "Tracii and Doug are among the most talented guitarists in the world," said producer Sir Harry Cowell. "The fans love them. Everyone in the show loves them. We can't wait to have them back on stage."

Guns, who was part of the show's original lineup when it debuted in 2013, founded L.A. GUNS in 1983. Since performing with "Raiding The Rock Vault", he has gone on to form the bands DEVIL CITY ANGELS and GUNZO.

Aldrich, who joined the lineup of "Raiding The Rock Vault" in 2014, founded the band BURNING RAIN in 1998 and has since performed with WHITESNAKE, DIO, and REVOLUTION SAINTS, before touring with Glenn Hughes earlier this year.

Consistently ranked the No. 1 performance in Las Vegas on TripAdvisor, "Raiding The Rock Vault" brings the history of rock 'n' roll to life. The Strip's resident party show, which boasts the greatest set list of all time, celebrates rock anthems from the '60s, '70s and '80s.

"Raiding The Rock Vault" performs Wednesday-Monday at 8 p.m., with tickets ranging from $59-$99 plus taxes and fees. A Rock Star Package is also available for $135 plus taxes and fees, which includes VIP tickets, a VIP Pass, a meet-and-greet with the rock stars prior to the show, and a two-CD set and concert program.

"Raiding The Rock Vault" opened at LVH in March 2013 and moved to Tropicana in December 2014. Musician, producer and vocalist John Payne (ASIA), who co-wrote the show's original script but was let go from the production in May 2014, sued his former "Raiding The Rock Vault" collaborator Sir Harry Cowell last July, alleging copyright infringement and slander and claiming he was owed money for his royalties and performances. That lawsuit was settled in December.

TWISTED SISTER singer Dee Snider slammed "Raiding The Rock Vault" earlier in the year, calling it a "tribute band of a bunch of add-on people who were not the people who played on these classic albums except for [guitarist] Howard Leese, who is the only actual guy who was in the studio making the records we love. Otherwise, it's an army of guys up there claiming their credentials, that they were in these bands, and they are not legit." He added: "It's offensive to the guys who actually played on these albums."