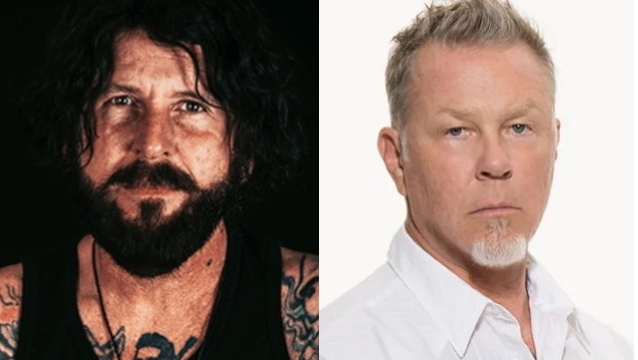 In a recent interview with RadioactiveMike Z, host of the 96.7 KCAL-FM radio program "Wired In The Empire", L.A. GUNS guitarist Tracii Guns said that he has had a number of pleasant run-ins with the members of METALLICA over the years. He said (as transcribed by BLABBERMOUTH.NET): "When we released our first album at the police academy here in L.A., everybody showed up but Jason [Newsted, bass], I think. They were all there. And they've always been really cool guys. And every time I see any of those guys, it's always, like, 'Hey, man. What's going on?' Super-friendly, down-to-earth guys. I really like the METALLICA guys."

Guns also recalled the time three decades ago he spent an evening at a bar in New York City with a particularly inebriated James Hetfield.

"Let me tell you a fast story," he said. "I'm in New York City getting ready to do press for 'Cocked & Loaded' [L.A. GUNS' 1989 album], and I had an advance copy of [METALLICA's] 'Black Album.' And I walk into the Scrap Bar. The only other person in there that night was James Hetfield alone in the Scrap Bar. And I walk up to him. And he was loaded, and I wasn't. He's all, 'Tracii Guns.' [I asked him] 'Doing press?' 'Yeah, why do you care?' 'That's why I'm here. That's the only reason why we're here at this bar alone, 'cause there's nothing going on.' He's, like, 'Yeah, I guess so.' I go, 'I have your new record and I listened to it a lot. I really like it.' He goes, 'You always pretend like you like METALLICA. You don't like METALLICA.' He goes, 'Yeah, I don't know, man. I don't know if you do. You're, like, fancy.' I'll never forget [him calling me] 'fancy.' I'm fancy? 'You play with guys like Michael Schenker.' [I'm], like, 'James, it's me, man.' And he was so, so drunk. Anyways, I established to him, and that was the only thing I did that night, was convince him that I liked his band. And I still don't think he believed me. But the next time I saw him, I go, 'You remember we were at the Scrap Bar together?' He goes, 'Nope.' I go, 'You don't?' He goes, 'Nope.' I go, 'We were doing press.' He goes, 'Nope.' He just completely denies the existence of that evening."

When he was asked to pick a METALLICA song so that it could be played on "Wired In The Empire" after the interview, Tracii said: "Oh, man. 'For Whom The Bell Tolls' is always the one, but let's just do 'Whiplash'. It just doesn't get any gnarlier. There's something about that song. It's so young. Unbelievable… It has this thing… It's what I like about the early L.A. GUNS and even some of the newer stuff, is that incorporation of… When the metal hits a certain tempo, and it's not necessarily the speed of the tempo, it's the way the tempo is played, it's mistaken for kind of a punk edge. And I think MAIDEN had it too on the early records. And I always loved that song more than other METALLICA songs, 'Whiplash'."

Guns is promoting L.A. GUNS' latest album, "Checkered Past", which was released on November 12 via Frontiers Music Srl.