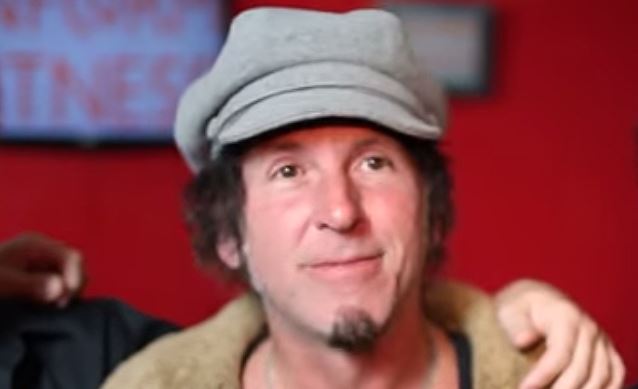 Former L.A. GUNS guitarist Tracii Guns was interviewed on the May 12 edition of the "Another FN Podcast With Izzy Presley". You can now listen to the chat using the Spreaker widget below.

Speaking about GUNZO, his new band also featuring legendary bassist Rudy Sarzo (ex-QUIET RIOT, OZZY OSBOURNE, WHITESNAKE), singer Keith St. John (X-DRIVE, BURNING RAIN, MONTROSE, QUIET RIOT) and drummer Shane Fitzgibbon, Tracii said: "In about a week or so, before we head out on tour, we're actually gonna start writing brand new music, which is something I wasn't really that looking forward to doing that with anybody. I just finished a record with DEVIL CITY ANGELS [the band Tracii formed with drummer Rikki Rockett (POISON), bassist Eric Brittingham (CINDERELLA), and vocalist/rhythm guitarist Brandon Gibbs (CHEAP THRILL)], and it's a really good middle-of-the-road rock record. But playing with Rudy and Shane and Keith has really inspired me to write some kind of neoclassical metal. So that's what I'm doing right now. Any spare minute I have right now, I've got a guitar in my hand and I'm trying to come up with really nice pieces of music and kind of take it from there. And everybody in the group and anybody that's involved with us, there's a lot of genuine enthusiasm to see this thing grow and do something meaningful in the future here."

Guns also talked in more detail about the kind of music fans can expect to hear from GUNZO's live shows and upcoming record release. He said: "Keith was in MONTROSE, on and off, for a lot of years. So [when we play out] we're doing a couple of MONTROSE songs, we do WHITESNAKE stuff, DIO stuff, OZZY [OSBOURNE]… Eventually we'll be doing more QUIET RIOT stuff. We did 'Killer Girls', which is a QUIET RIOT song that Randy Rhoads wrote; it was on their second record with Randy Rhoads — a very old song. So we're trying to, right now, celebrate all this great stuff we've done over the years, and in doing so, our setlist is unbelievable — from 'Rainbow In The Dark' to 'Crazy Train', 'Never Enough'…. Just great stuff. So anything that we will write and put out in the future will be that vein of music, which is something that I haven't had any interest in writing in years. But this is the perfect vehicle to do that."

He continued: "When I say 'neoclassical,' I really mean it. I'm writing some really, kind of…. for lack of a better expression, kind of soundtracky classical music that I have been writing for other projects, 'cause I also try to weasel my way into movies and television and stuff like that, so I have a lot of different kind of stuff kind of on the backburner that I can draw from, and, if nothing else, it inspires me to write stuff specifically for this."

Tracii added: "The plan is to not ever really play [any new songs with GUNZO] until it's out. We're very aware that when you go to see a band like this, people wanna hear hit after hit after hit after hit; we don't really wanna have to have anybody sit through a six-minute brand new song that they've never heard before live. And sometimes live isn't the best place to do every type of music. I mean, it's great to present straight-up rock and roll live, because it's immediate, but I think what we're gonna be writing isn't gonna be exactly immediate."

Asked if it was awkward reuniting with L.A. GUNS singer Phil Lewis onstage during a SIN CITY SINNERS concert in Las Vegas in December 2013, Tracii said: "Well, I had been talking to [Phil before that], because I was living in a hotel in Las Vegas doing a show for that year, 2013, and he had moved to Vegas, and he had let me know, and so we had talked a few times.

"Phil and I really never lost… we never really had any real bad blood. I mean, we had some cat fights and stuff like that. But, no, there was no weirdness backstage at all from the get-go at that gig. And it's great. It's so familiar to both of us that it's very comfortable and there's no hesitation or wondering what the other guy is gonna do, or anything like that, because we've done it so much. It had literally been eleven years since we had been on stage together. It just felt normal. It felt like, 'Hey, we're doing L.A. GUNS music, shit we wrote together, and we're really good at L.A. GUNS music.' [Laughs]"

He continued: " I was just there [in Las Vegas] with GUNZO [at the end of April] and [Phil came onstage and] sang [the L.A. GUNS song] 'The Ballad Of Jayne' with us again [see video below]. And we're actually… There's kind of a little plan right now that him and I… actually, him and GUNZO… we may actually do something out of the country for a minute together. So there's all kinds of possibilities. But the reality of any type of what Phil and I would call an L.A. GUNS 'reunion,' that probably won't ever happen. But there's a good chance that you'll see even possibly new music from Phil and I. Certainly, at some point, as long as we're living, we'll definitely be on stage again at some point together."