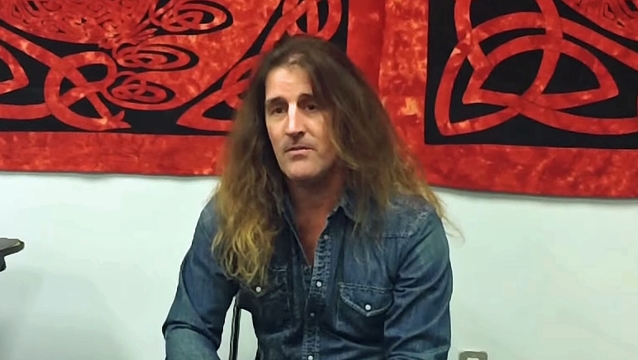 Jeff: "It's been an amazing journey. Obviously, when we started out, it was a very humble show with a lot of questions — more questions than answers. Through the perseverance of [late TSO mastermind] Paul O'Neill and the management group around him, we stuck to this thing and kept on putting the product out. Paul made his point, and finally it caught on, and here we are twenty years later, and TRANS-SIBERIAN ORCHESTRA is bigger and better than ever. It's amazing what's happened... To sit where I sit and, from the very first show to now, to see this thing grow in front of me, to the left of me, to the right of me, above me, behind me, it's really amazing. The very first show [in 1999], I remember walking on stage with Johnny Middleton, our bass player, and we were like, 'Oh my God. What did we get ourselves into?' After that show, we knew we had something. Paul would not give up, and here we are."

Jeff: "It was very strange, to say the least. Obviously, our hearts still go out to his family. When I got the phone call, all of a sudden, this feeling came over me, like, 'Wow. If this is it, it's been an incredible run. If this is not it, we've got to really buckle down and get serious, because the guy who's been steering the ship all this time is no longer here.' Paul had said many, many times over the years, 'TRANS-SIBERIAN ORCHESTRA is going to outlive us all.' Who would think it would outlive the man who created it, but this is unfortunately what happened... Paul really surrounded himself with some very bright, motivated people, and having been here from the very beginning of this, you understand who Paul is and what he is and what TRANS-SIBERIAN ORCHESTRA is. It is a different animal. This is a band and a tour like no other, but the people around this understand it, and when the time came for them to really take the reigns and run this thing, everybody was prepared to do it. I've been here from the first note. So has Chris Caffery, Al Pitrelli, Johnny Middleton. You've got a core of people that have been here and lived through everything. We've seen everything; we've learned a lot from Paul; and now it was time to put all that to the test. Last year, it's not really that I had any reservations or I was afraid of the tour or anything, but Paul created something that is going to outlive us all. To his credit, everybody missed Paul; everybody knew that we lost our leader, our friend, [our] creator; but everybody is still with the show and supportive of the show because he created something that really means a lot to a lot of people. There's people that cannot function in the holidays until they see TRANS-SIBERIAN ORCHESTRA. This is what makes their holidays, and for a lot of families, this is what they do — this is their family get-together. Paul made a very conscious effort of trying to keep tickets reasonably priced so people could bring their families... Paul was very conscious of the fact that we do the show every year, [so] you have to be able to make it affordable and convenient for people to come back every year and see this. For the ones who've seen us all these years, we can't thank you all enough, because it wouldn't happen without you."

On the status of TSO's numerous projects that were in various stages of completion when O'Neill died:

Jeff: "When we lost Paul, there's a lot of open questions. Paul filled a lot of roles. He was the final say in everything, so the question there is, who takes over that role now? His daughter [Ireland], she's getting her head wrapped around this whole project and this whole company and the creative process. Paul was her idol, and as [with] all of us, he was her teacher. I think that she is going to really make a strong effort to pick up where things left off and finish some of these projects that Paul had started. We did have a lot of material that was close to being finished, or maybe even closer than that — or maybe is just some words scribbled on a paper that he had some ideas for. But I think that his family, once they got over the heartbreak of all this, realized TRANS-SIBERIAN ORCHESTRA is a very successful band; it's a very successful company; but it also means a lot to a lot of people. I'm sure there will be an effort to get some more stuff recorded and put out there between Paul O'Neill, what he left behind, but [also] Al Pitrelli, Jon Oliva, Dave Wittman, our producer — there's some very, very bright people involved here who know exactly how Paul works. I think putting that together, I've got my fingers crossed. Even if I knew something, I couldn't share it, but right now, I know that there's some activity going on."

On the prospect of a SAVATAGE reunion:

Jeff: "There's always been that thought. We did get back together for the Wacken show in 2015. There was a lot of talk after that show, because it was very well-received. When the band got back together, it's just so interesting how when a certain group of guys get together and play music, it's just different than plugging other people in. There's a real chemistry there with the six of us — Jon Oliva, Chris Caffery, Johnny Middleton, Al Pitrelli, myself and Zak Stevens. Of course, there's always interest, but when we lost Paul, it had to get pushed aside. There's always conversations, and personally, I would really love to see it. We would love to make that happen, but with everything that's happened over the past couple of years, there's a lot going on there. Once all the business end of this whole scenario gets sorted out here and we all get in a room and really talk about some things... It's going to take a little time — none of this stuff is easy — but I would love to see it happen. I know a lot of people would, and I know a number of guys in the band would really like to see it happen too. But TRANS-SIBERIAN ORCHESTRA, that's the focus — that has been our success, and this is what our careers have become. If we can somehow squeeze some SAVATAGE music or some shows in there around all this, that would be fantastic."

Plate joined SAVATAGE in 1994 and made his recording debut with the band on the following year's "Dead Winter Dead". An instrumental from that album, "Christmas Eve (Sarajevo 12/24)", was re-released in 1996 under the TSO moniker and went on to become one of the most popular holiday songs of the past two decades.

TRANS-SIBERIAN ORCHESTRA will kick off their annual winter tour — during which the group splits into two touring troupes — on November 14. This year's trek, which celebrates TSO's twentieth year of touring, will visit 65 cities across North America for 100-plus performances before concluding on December 30.

SAVATAGE released 11 studio albums and one EP between 1983 and 2001. Other than their appearance at Germany's Wacken Open Air festival in 2015 (where they played alongside TSO),the group has not performed live since 2002.