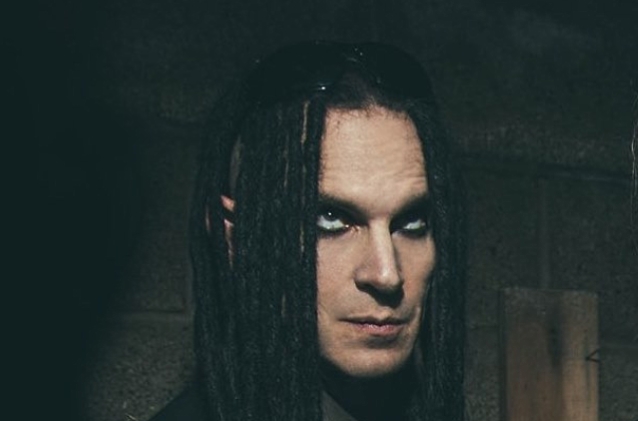 Ex-STATIC-X guitarist Tripp Eisen says that "its exciting" to see his former bandmates putting out some of the previously unreleased songs he wrote with the group's late frontman Wayne Static.

In 2018, STATIC-X announced plans to release "Project Regeneration", its first new album in a decade, featuring the last recordings of Wayne, who passed away more than five years ago. The rest of the band's original lineup — bassist Tony Campos, drummer Ken Jay and guitarist Koichi Fukuda — is also featured on the album and in the music videos.

Originally scheduled for release in spring of 2019, the new STATIC-X album was first intended to feature several guest vocalists, along with the original "Wisconsin Death Trip" band lineup of Campos, Jay and Fukuda.

During the recording sessions for "Project Regeneration", STATIC-X claimed in a press release that one of its producers uncovered several additional unreleased and unfinished tracks, many of which contained isolated vocal performances by Wayne Static. Because of this supposed find, the new STATIC-X album will now feature lead vocals by Wayne on virtually every song.

Due on July 10, "Project Regeneration Vol. 1" — the first of two volumes — features 12 brand new tracks, containing many of Wayne's final vocal performances and musical compositions, along with Campos, Jay, and Fukuda. Both volumes are being worked on by longtime STATIC-X producer Ulrich Wild.

Speaking to "The Rock N Ragni Show", Eisen stated about "Project Regeneration Vol. 1" (hear audio below): "It's exciting. I've got, I think, six or seven songs on it. They're songs I wrote back with Wayne — they're Wayne/Tripp songs, a lot of 'em; some of 'em are just Wayne songs. But there's some cool songs — songs that were left over from [STATIC-X's 2005 album] 'Start A War'. So it's exciting. The form they took are not exactly what Wayne and I had in mind. But they're putting it out. It's great to see the music stretch out there and it's getting unleashed."

Asked if it's weird to see the music he wrote so many years ago redone and reworked from how it was originally intended to be, Tripp said: "Yeah, it's not the ideal situation — it's not how I would have liked it to be. It's kind of like 'Star Wars: Episode I' ['The Phantom Menace'] — it wasn't the best thing it could be, but I'd rather have it there than not have it there, I guess. So, it's the lesser of two evils."

Tripp also confirmed that STATIC-X approached his new band FACE WITHOUT FEAR about filling the support slot on some of the "Wisconsin Death Trip" 20th-anniversary tour dates last year. "Yeah, they offered us a leg of the tour, but it had to do with me signing over some of the rights to the songs. And it just didn't feel right. But they offered us that. And who knows what the future will hold?"

In June 2019, BLABBERMOUTH.NET published an interview Eisen gave to "Totally Driven Radio" in which he first revealed he was involved in the making of "Project Regeneration". The news of Eisen's association with the LP did not sit well with many of STATIC-X's fans who objected to the fact that a convicted sex offender was collaborating with the group on new music. (More than a decade ago, Eisen served time for meeting and sexually assaulting two underage females in January and February 2005.)

Asked by a fan on Instagram if it's true that "a known sex offender" was working with STATIC-X on the band's new album, the group responded: "Listen! Let me make this very clear. Wayne, Tony, Ken and Koichi are the ORIGINAL line up of the band and we are celebrating our 20th anniversary & memorializing our friend Wayne!!! The 3 of us and Wayne are the TOTAL focus of this album and this tour. That guy was in static x for a couple years prior to HIS OWN personal troubles. His issues have NOTHING TO DO WITH US!!! ... He was a co-writer on songs with Wayne & the band in the past. Some of those old songs ended up being tracks that Tony and the producers recovered some of Wayne's unreleased, isolated vocals on. Those isolated vocals have never been heard and they are very special and some of the final pieces of art that Wayne left behind. Clearly, the guy you mentioned is promoting his new band by mentioning his PAST involvement with Static-X and he is attempting to gain credibility through his PAST association. Tony, Koichi and ken entered the studio together, along with their touring vocalist 'xer0' and they have been working diligently to craft some amazing music underneath Wayne's unreleased vocal tracks. Tony, Koichi, Kenny, and xer0 are the only people participating In the recording of this new album. Aside from Wayne's vocals and a couple guest vocalists, NOBODY ELSE is involved in the recording and production of his album. Tony, Ken, Koichi and touring vocalist 'Xer0' are the only people that have been in the studio recording and working with the bands original producer Ulrich Wild on this incredibly special new album. End of story."

Tripp joined STATIC-X in 1999 and recorded three albums with the platinum-selling band.

Three years ago, Eisen told "Totally Driven Radio" that his arrest and prison sentence was "a difficult time of my life" and insisted that he has "learned from it" and "grown. What happened to me was really bad judgment, terrible mistakes that I made, and I paid a price for 'em," he said.