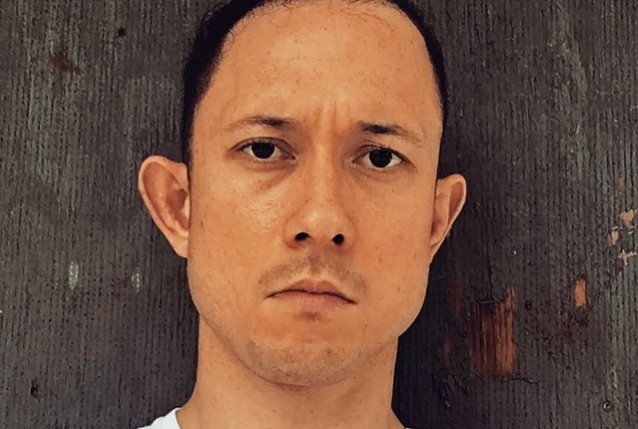 TRIVIUM Frontman Braces For Hurricane Irma: 'If All Hell Breaks Loose, I Can Get In The Canoes And Swim Away'

TRIVIUM frontman Matt Heafy, who lives in Orlando, Florida, says that he spent the past week preparing for Hurricane Irma, loading up on food and supplies for him and his wife. They also brought in a generator to maintain power for their Central Florida house, which is in the forecast cone of Irma's potential path.

"I've never done so much adult prep before for a storm," he told this week's DOMKcast (hear audio below). "Got all the propane filled, gas filled. It's pretty crazy. Everything's starting to run out. The gas stations have no fuel, the grocery stores are cleaned out of water… yeah, the list goes on. But I think I have everything now. I think I'm good. I'm ready to hole up in the house and now I'm good."

Adding that he has "never had this bad of a hurricane come around," Heafy said that he doesn't expect he and his wife will have to evacuate during Irma.

"I am the least handy person in the world, so I guess it's been good for me to have to do all this stuff," he added. "I feel like I definitely am a grownup now. I did this on my own. I'm, like, 'Wow! Cool! I pulled this off.'"

Heafy said that even though he was in Florida during Hurricane Andrew in 1992, he was too young to remember the true impact of the category 5 storm, which remains the most destructive hurricane ever to hit the state. "I was a kid and it didn't really hit our area — I was in Coral Springs at the time," he explained. "That's when I was really young, so my dad kind of took care of everything. I don't really remember what kind of stuff he did."

According to Matt, he looked to Houston and lessons learned from Hurricane Harvey in order to properly brace for Hurricane Irma's potential impact.

"We got home from Europe on Saturday, and we were following all the Houston storms a lot and seeing how terrible it is," he said. "And so we knew a hurricane was coming up. My wife and I were, like, 'All right. Let's go do the grocery shopping now.' So we did it on Sunday, before people were really started to prep. And then, when it declared a state of emergency and it started making local news and national news, then it was like an influx flood of people. And now is where you see two-hour gasoline lines at Costco. All the gas stations have mile-long cars waiting for gas and everything. So I'm glad we have everything — we have food, water, generator, all the stuff. So it should be good."

Heafy said that even though all of Florida will be impacted by hurricane-force gusts, the worst of the storm surge will hit the southern part of the state, with Orlando and surrounding areas facing possible power outages and moderate wind damage.

"My sister-in-law and her husband, I think they have to evacuate from Tampa, because Tampa's got flood risk, but, luckily, Orlando is not really overly coastal," Matt said." So apparently we'll be all right from flooding. So we'll see. 'Cause we're thankfully pretty central. I mean, it's gonna over everything, but we're not against any rivers, lakes, oceans… We're kind of far from all that stuff where we're at. And our house is actually one of the highest up. So I think we'll be okay. I hope so. I have a couple of sandbags. And my friend left his canoes in our backyard, so if all hell breaks loose, I can get in the canoes and swim away."

As of 8 a.m. Saturday morning, Hurricane Irma, the most powerful Atlantic storm in a decade, was about 225 miles from Miami, moving west-northwest at 12 mph.

Florida's west coast faces threats of severe flooding when Irma makes landfall as a Category 4 storm, which is expected to happen between early Sunday and early Monday.

TRIVIUM's new album, "The Sin And The Sentence", will be released on October 20 via Roadrunner.

Listen to "DOMKcast with Matt From Trivium" on Spreaker.