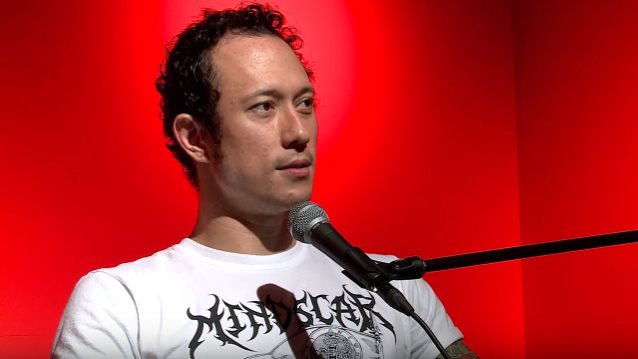 Roxy Myzal of HardDrive Radio recently conducted an interview with TRIVIUM vocalist/guitarist Matt Heafy. You can watch the full chat below. A few excerpts follow (transcribed by BLABBERMOUTH.NET).

On staying in shape while on tour:

Matt: "Jiu-jitsu has become the biggest part of my life outside of music. Music is probably first, then jiu-jitsu. That's why I've gotten so intense with my practice schedule — I've had to learn something from the ground up. I remember the first time I ever grappled or sparred or fought. I was against someone who was probably 60 or 70 pounds lighter than me who was 17 years old. I thought, 'I got this.' And he choked me out in 20 seconds. I was like, 'All right, I don't know anything about this at all.' And I love that. I like things that are humbling. I like the fact that my entire life, I've been playing guitar and singing in TRIVIUM. I joined the band when I was 12, so to pick something up new that I didn't understand that was frustrating, weird, and difficult, and seemed impossible, and still seems impossible some days, it was a metaphor for life, learning jiu-jitsu. It's about learning about yourself, the habits you have, and what you like. And how you learn; I've learned that I'm a slow learner."

On playing the Download festival in Paris for the first time since the November 2015 terrorist attacks at the Bataclan theatre:

Matt: "That day was particularly difficult for us and the band. I woke up, went in the dressing room, getting ready for the day, and a bomb-sniffing dog checks the dressing room and leaves. And I look on my phone and check the news… And we'll backtrack… When the Bataclan shooting happened, we were in Orlando. The merch guy who was killed at the show was a merch guy of ours for years — Nick [Alexander]. He was a really good guy. The morning of the Download Paris show, the Orlando shooting happened at club Pulse, the exact same day. When I was in Paris, the Orlando shooting happened; when I was in Orlando, the Paris shooting happened. It was very difficult for me. It was ironic as well because a lot of my family was so worried about me particularly being in Paris. You never think of all places Orlando, Florida would have a shooting with the night before, Christina Grimmie, and the next day at Pulse, and the next day, a kid gets eaten by a gator. Florida is pretty insane with all the stories that have been happening lately.

"So, it was a very difficult day for us, and we were down. We were trying to think of any way we could help, so we got three of our guitars and started having every band from every festival sign them. We were able to raise almost $10,000 for that, so we sent that in. That helped a bit. When we played the show that day, I told the crowd the story: 'This is a very difficult day for us, as you know Orlando had a shooting back home.' I told them, 'We were with you guys for the Bataclan shooting. This is proof that nothing will ever stop all of us from doing what we love.' That was really great to have that. A week later, we were in Brussels and Brussels also had attacks. When we were in the center of Brussels — and it gives me chills thinking about it — they had a big Orlando monument in the city, so that was really cool. I took photos of that. When we played the Graspop [Metal Meeting] the next day, I told them, 'Thank you guys for your support. We were with you guys as well.' It's weird to have to make that same speech, but it's also a good thing. It was the highest attendance Graspop had ever had, and Download Paris, that was the first year it had sold out. It's showing people aren't afraid of doing what they love. We shouldn't be. We shouldn't be afraid to go out and do things and do as we do, because that's what the extreme minority that we're afraid of wants [us] to do. It's not working."

On the songwriting process for the band's next album:

Matt: "We haven't really discussed it too much, yet. But, we know this is probably going to be the last North American tour, so people need to get out to it. Once the cycle is done and we take some time, we can start talking about it again. It's pretty nuts to think we have seven records out. [Laughs] It's funny, I heard an interesting story. When we first came out, everyone called us 'that young band,' or 'that kid band,' or 'that teenager band.' I won't say which state or city, but there was a station one of our good friends was working to get us played at, and the guy went, 'Haven't those guys been around since the '70s or '80s? They're super-old now. Why would I play them?' I'm like, 'What the heck happened?' A lot of the young bands now, we're the same age as them, we just started really young. It's an interesting shift."

TRIVIUM's latest album, "Silence In The Snow", was released in October 2015 via Roadrunner. The follow-up to 2013's "Vengeance Falls" was produced by Michael "Elvis" Baskette (SLASH, ALTER BRIDGE, THE AMITY AFFLICTION) and was mixed by Josh Wilbur (GOJIRA, LAMB OF GOD).