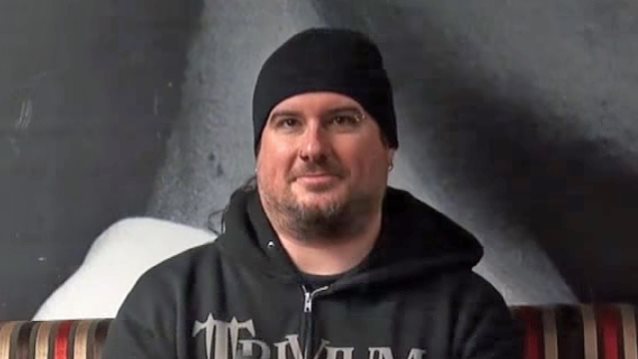 Finland's Kaaos TV conducted an interview with guitarist Corey Beaulieu of Florida metallers TRIVIUM before the band's February 27 concert at The Circus in Helsinki. You can now watch the chat below. A couple of excerpts follow (transcribed by BLABBERMOUTH.NET).

On how the latest TRIVIUM drummer Alex Bent (BATTLECROSS, DECREPIT BIRTH) is working out:

Corey: "It's been amazing. He's definitely got all the talent all the world. He can play all our songs throughout the catalog. The reviews from this [European headlining] tour, everyone's been saying we sound… probably some of the best shows they've heard us play. So that's definitely a good thing. Yeah, we're just having fun, just getting some shows under our belt. We've gelled really quickly. From the first times we rehearsed with him down in Florida, it just kind of clicked right away. His style of drumming really meshes with our guitar playing really well. So it's been going great. So we're having a really good time and enjoying all the shows."

On whether all the drummer changes have hurt TRIVIUM:

Corey: "Some bands change their whole lineup, or have had a million membes throughout their career. It's just unfortunate that the people we've given opportunities to play in our band, and everyone's had the same opportunity with giving them the chance to play with us, and pretty much take advantage of the opportunity given to them. And the reason why we keep switching drummers is 'cause none of those people have stepped up to the plate to give the band what we need to perform for the fans or do what we need to do at a high level. So every time we've switched drummers, it's always been with the intent that that was gonna be the guy moving forward, and then, [because of various] circumstances or whatever, they weren't able to fulfill what the obligations needed for the band to operate at the highest level. So we always try to find… Hopefully the next person that we find will be that person. And if not, you just keep looking. It's like chicks. You date somebody, and six months later, you break up and you always look for the possible wife. So we're just taking it now… Since we've had a bunch of changes, we're kind of a little more cautious of moving too fast. But, yeah, we're really feeling… The fans seem to have really enjoyed the shows with Alex, and we've gotten great responses from his playing and how the band sounds. We've got this tour left before we're off for a while, so we're just kind of doing this tour and we'll see what happens."

On the progress of the songwriting sessions for TRIVIUM's next album:

Corey:"We don't wait 'till a certain time to start writing. We're always coming up with riff ideas and musical song demos, lyrical topics and stuff like that, so by the time it gets around to the talks of when we're gonna do another record, we usually have a lot of stuff to go through to, I guess, kind of see where we wanna go. So we've been talking about it for a while, but it's still too early to really divulge with details and stuff like that… We don't have anything that's left over from the previous record, so it's all fresh stuff that we've been writing or collecting ideas for the last year or so."

Wandtke made his live debut with TRIVIUM in December 2015 at Knotfest in Mexico. A short time later, he appeared in an official promotional photo with the three core members of the band.

Paul joined the Florida outfit on the recommendation of DREAM THEATER's Mike Mangini and replaced Mat Madiro, who departed due to reasons of "creativity."

Madiro was the featured drummer on TRIVIUM's latest album, "Silence In The Snow", which was released in October 2015 via Roadrunner.