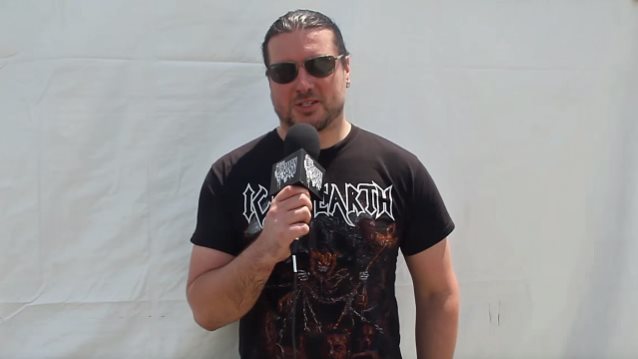 Rodolfo Roman's "The Roman Show" conducted an interview with TRIVIUM guitarist Corey Beaulieu at this year's edition of the Fort Rock festival, which was held on Saturday, April 30 and Sunday, May 1 at JetBlue Park in Fort Myers, Florida. You can now watch the chat below.

Speaking about how TRIVIUM keeps its songwriting fresh on every album, Corey said: "The three of us, Matt [Heafy, guitar/vocals], Paolo [Gregoletto, bass] and I, writing songs, we're usually always on the same page. We talk a lot. There's a lot of communication with directions and stuff. We plan ahead. We're very thorough with our creative process — everything from the artwork to the videos; we're very hands-on with what we wanna do. We just have a creative vision, and we strive to do that. With this record [2015's 'Silence In The Snow'], we had a specific vision with what we wanted to do. And we just wrote until we had the right songs that we felt were the songs that really kind of nailed all our bullet points of what we wanted to accomplish with the record."

He continued: "Every record we're just looking to… We know what our sound is, and we know elements make up our sound. And we're always just pushing ourselves to try to find ways to, I guess, use all those elements to create something fresh and new and not, kind of, regurgitate our sound too much and not write the same songs or the same record. We want every record to have a uniqueness to it that stands on its own. And I think so far, having as many records as we do, each record kind of stands alone as its own thing, and it's really cool. We have a wide range of types of songs, so we try to hit all those diferent avenues. We like heavy stuff, we like very melodic, anthemic stuff, so with our sound, we could do a lot of stuff with it that keeps it, at least for us, creative-wise, every record, it's fresh and exciting for us."

"Silence In The Snow" was released on October 2, 2015 via Roadrunner. The follow-up to 2013's "Vengeance Falls" was produced by Michael "Elvis" Baskette (SLASH, ALTER BRIDGE, THE AMITY AFFLICTION) and was mixed by Josh Wilbur (GOJIRA, LAMB OF GOD).