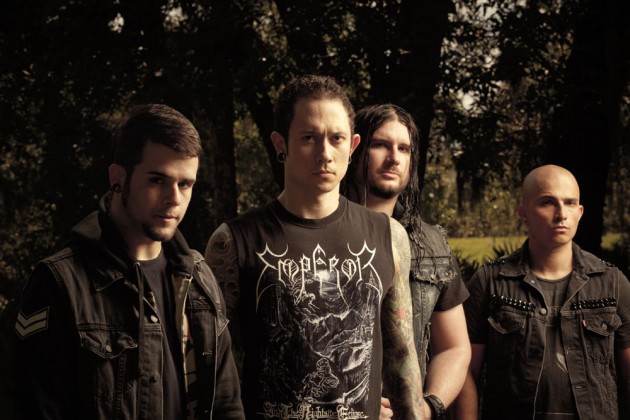 Metal Hammer editor Alexander Milas recently conducted an interview with guitarist Corey Beaulieu and guitarist/vocalist Matt Heafy of Florida metallers TRIVIUM for the "Metal Hammer" radio show on TeamRock Radio. You can listen to the chat using the SoundCloud player below.

TRIVIUM's eagerly awaited new album, "Vengeance Falls", will be released on October 15 via Roadrunner Records. Produced by David Draiman (DISTURBED, DEVICE),the follow-up to 2011's "In Waves" is available for pre-order at Trivium.org. The first single, "Strife", is available as an instant download with all pre-orders.

Producer David Draiman added: "'Vengeance Falls' is a masterpiece of metal. It is [TRIVIUM's] finest work to date, and a record so strong that it will blow the doors open to a world they deserve to dominate."

Long hailed as one of modern metal's most powerful live acts, TRIVIUM will hit the road hard in support of "Vengeance Falls", kicking off with a North American co-headline tour alongside DEVILDRIVER. The dates get underway Thursday, September 12 at Boise, Idaho's Knitting Factory and then continue through mid-October.

"Vengeance Falls" marks a massive creative milestone for the acclaimed metallers. The collection — recorded earlier this year at Draiman's Austin, Texas home studio — sees the band pushing the envelope on their own distinctive sound, a sonic approach that saw "In Waves" hit No. 1 on Billboard's Hard Rock Albums chart upon its release, not to mention a stunning Top-15 debut on The Billboard 200 — their highest chart rankings to date.

TRIVIUM filmed a video for an as-yet-undiclosed song off "Vengeance Falls" in July at Studio One in Orlando. The clip was directed by Ramon Boutviseth, who has previously worked with NONPOINT, DARKEST HOUR, INCUBUS and ALL THAT REMAINS, among others. Check out photos from the video shoot at this location.

TRIVIUM will hit the road in North America this fall with DEVILDRIVER, AFTER THE BURIAL and SYLOSIS.