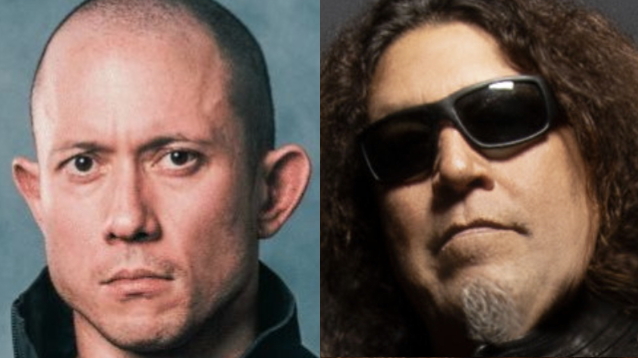 TRIVIUM frontman Matt Heafy has collaborated with TESTAMENT singer Chuck Billy on a new song called "Behold Our Power". The track, which was released under Heafy's name via his YouTube channel, was apparently written as the theme song for the 2022 installment of Poland's Mystic Festival. The event, which is scheduled to take place in June, will be headlined by JUDAS PRIEST, OPETH and MERCYFUL FATE.

TRIVIUM's tenth album, "In The Court Of The Dragon", was released last October via longtime label Roadrunner Records. The record was produced and mixed by Josh Wilbur and recorded in the fall of 2020 at Full Sail University in Orlando. The album cover is an original oil painting by French artist Mathieu Nozieres.

TESTAMENT's latest album, "Titans Of Creation", came out in April 2020 via Nuclear Blast. The disc was produced by Billy and guitarist Eric Peterson, while Juan Urteaga of Trident Studios handled co-producing, recording and engineering. Andy Sneap was responsible for the mixing and mastering of the album. Eliran Kantor stepped up once again to create new artwork for the cover of this release.

In early 2020, TESTAMENT completed "The Bay Strikes Back" European tour with EXODUS and DEATH ANGEL.

The North American leg of "The Bay Strikes Back" tour was originally scheduled to kick off on October 6, 2021 at the Fremont Theater in San Luis Obispo, California and make stops in Austin, New York, and Detroit before concluding on November 27, 2021 at The Fox in Oakland, California. The trek has since been rescheduled for April and May 2022.