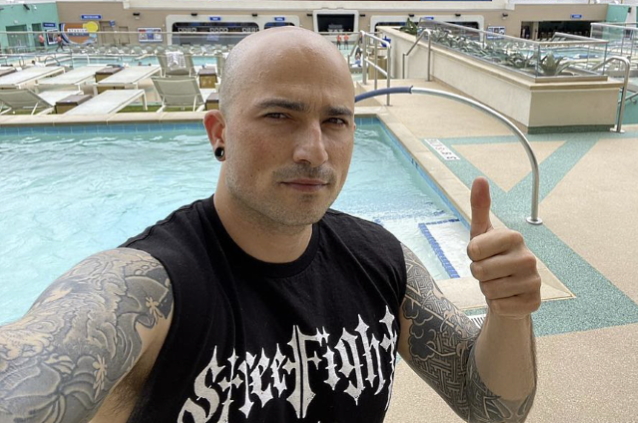 TRIVIUM's PAOLO GREGOLETTO: Why We Didn't Publicize 'The Metal Tour Of The Year' COVID-19 Scare

TRIVIUM bassist Paolo Gregoletto spoke to Mankato, Minnesota's "Midwest Beatdown" radio show about the COVID-19 "scare" he and his bandmates experienced early in their recently completed U.S. tour with MEGADETH, LAMB OF GOD and HATEBREED. "The Metal Tour Of The Year" marked the four groups' first run of concerts since the start of the pandemic.

"Right after show three in Houston, our tour manager started getting kind of a dry cough," he recalled (as transcribed by BLABBERMOUTH.NET). "He kept his mask on a lot of the time in our dressing room, and I'm, like, 'You know what? I bet he doesn't feel good right now,' and I had a suspicion, but I didn't say anything. And I went to bed that night, got up. We were in Odessa for a day off. We all went out to dinner — crew and band — except for our tour manager; he was staying back. I figured it was for tour manager business stuff. I get a text at the end of the meal, and he was, like, 'Yup. I have COVID. We're gonna have to, obviously, inform the tour.' And so our brains are, like, 'Oh, man. We've gotta devise a plan here before we say anything.' And so we all went back to the bus. We had a bunch of tests with us. We got a couple of extras. Everyone tested. No one else was positive. We caught up our manager. We caught up the tour. We pretty much said, 'Look, we're not gonna cancel a show. Everyone's good. We're all isolated from our tour manager. We'll test tomorrow and as many days in a row as you want.' And no one ever got sick on our bus except for our tour manager. And we kept going. That was basically it.

"There was really no rule kind of set up how that was gonna work," Paolo continued. "But what we've been seeing people do is, okay, someone on a [tour] package will get sick, and they'll be, like, 'well, everyone's gonna take 10 days' or something to quarantine — whatever people are doing. And we were, like, it's not possible. There's too much at stake for a tour this size, or any tour, really. 'Cause if you start canceling shows, the margin is very, very thin with that kind of stuff; it's not sustainable. So we were just, like, 'Look, if no one is sick, the show must go on.' So that's what we did. HATEBREED's sound guy helped us out big time by filling in on monitors. Our assistant tour manager picked up the slack for the shows, and then our tour manager was just e-mailing — Zooming in; [sending] e-mails, doing all the stuff he had to do. And he came back when he was fine, and that was it. And we kept rolling."

Gregoletto added: "It was scary, obviously, but I was also kind of relieved to have that happen right away, 'cause it's, like, once you kind of know what it could be once it happens… It's kind of like Matt [Heafy, TRIVIUM frontman] when he got sick [with COVID-19] way before the tour, it's scary 'cause you've been trying to avoid it the whole time, but then, when you get through it, you're, like, 'All right. I felt bad for a few days and now I'm good.' It felt good to just have that happen, and we dealt with it, and the show went on. And we didn't publicize it 'cause we didn't wanna [create] any sort of doubt that the tour was gonna get canceled, that shows would get canceled. 'Cause it's crazy times right now. I'm sure a lot of people have seen bands are dropping from tours and stuff, and we just didn't wanna do that. So we chose this way instead."

TRIVIUM's tenth album, "In The Court Of The Dragon", was released on October 8 via longtime label Roadrunner Records. The record was produced and mixed by Josh Wilbur and recorded in the fall of 2020 at Full Sail University in Orlando. The album cover is an original oil painting by French artist Mathieu Nozieres.