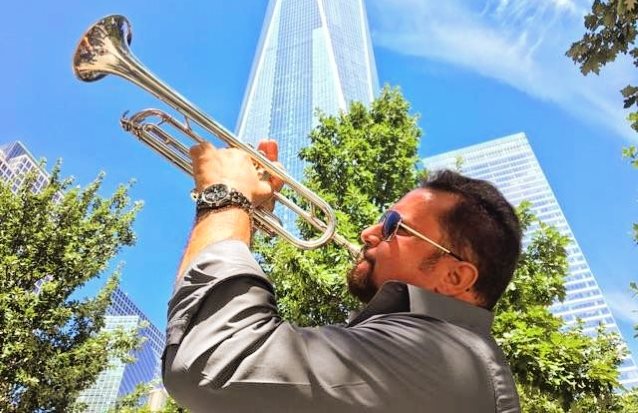 On this somber day in American history, the latest pop-classical solo effort from TRIXTER drummer Mark Gus Scott reinforces the mantra "We Will Not Forget!" His latest video shows Mark performing an emotional version of Franz Schubert's "Ave Maria" among numerous iconic New York City and Washington D.C. landmarks in a story-telling fashion that Mark — a New York resident at the time of the 9/11 attacks — relays to his son, Brandon Michael Scott. The video also marks Brandon's directorial debut as a filmmaker.

"Ave Maria" is the first single from Mark's forthcoming holiday album titled "Christmas Miracle", to be released on Thanksgiving.

All proceeds from "Ave Maria" will be donated to the Hope 4 Kids International (H4KI) charity for which Mark, an international spokesperson, is a contributor and partner.

As the wild and charismatic member of the internationally renowned rock band TRIXTER, Mark Gus Scott has sold well over three million albums worldwide. Mark has performed in front of millions of people around the world and now employs his classical training yet again to bring about a "Christmas Miracle".

A long-standing member of the philanthropic community, Mark Gus Scott continues his charitable crusade by joining forces with arguably the greatest charity to make an impact around the world, Hope 4 Kids International. Hope 4 Kids International is a four-star rated non-profit organization committed to helping children around the world that are suffering from extreme poverty through dignity, health, joy and love. Mark Gus Scott's support and partnership with H4KI is helping make dreams come true for some very special children all around the world.

Through H4KI's mission to help in the empowerment of children who suffer from extreme poverty, Mark has been inspired to sponsor nine-year-old Alowo Cathy. She could hardly contain her joy when learning that Mark had become her sponsor. Living in Uganda, life is extremely difficult for a child barely surviving in the margins of society. This gift of life has given her courage to dream. Singing in the church choir, hope resonates more gloriously than ever throughout her small village. A gift of love worth singing about!

Being appreciative of the life Mark has been afforded, he shares the following: "As an individual who has been extremely fortunate to achieve a life-long dream, I truly recognize the value, importance and impact it can have on the life of a child. It is my passion, through the sales of 'Ave Maria', that deep hope will come to kids believing their dreams will never come true and that their lives are over. Together through dignity, health, joy and love, we can all give them life-changing support!

"I thank Hope 4 Kids International for their tireless work and efforts in making this world a better place. It is a privilege to join H4KI in their quest to enrich the well-being of children all around the world. This Christmas, I urge you to join me in a call to action to make a difference."