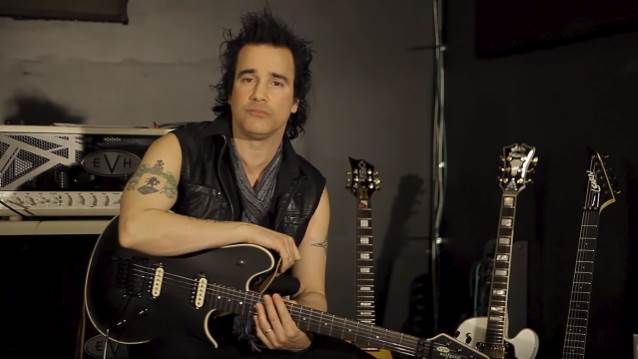 When KISS kicked off its European tour last month in Barcelona, Spain, a number of YouTube videos surfaced online of Stanley clearly struggling to hit the high notes in many of the band's classic songs. This prompted renewed calls for the group to finally call it quits, with some KISS detractors insisting that Paul hasn't been able to deliver the band's material with conviction for many years.

Brown, who is not only a great guitarist but an accomplished singer, commented on Stanley's recent vocal problems during an appearance on the "Ouch, You're On My Hair" podcast. He said (hear audio below): "Eight years ago, I had to have vocal surgery; I blew my voice out from all the years of singing, and I couldn't do it anymore. So I'm a big believer in what they [call] rehabilitation — taking care of yourself and getting a vocal coach. And Joe Elliott [DEF LEPPARD] is a perfect example of somebody who had… A couple of years ago, he was really having a tough time; they had to cancel a bunch of dates back in 2016 right after the [DEF LEPPARD] cruise. And I've gotta tell you… I believe, and Joe is living proof — [he is] somebody who… he worked every day with his vocal coach and rebuilt himself. And now, on this tour, he's singing better than he has in 20 years. And I've seen him on every tour since 'Hysteria' multiple times, and I can honestly say, this tour, he was singing better than he was 10 years ago, [and] probably better than he was 15 years ago."

Adding that WHITESNAKE frontman David Coverdale is another singer who is "having some problems out there," Brown said that "it's hard to watch" some of his favorite vocalists unable to reproduce their most popular songs on the concert stage.

"I don't wanna ever tell anybody what to do, but I think if they ever called Joe Elliott, he would say, 'Hey, man, go get yourself a good vocal coach and kind of rethink this,'" Steve said. "Like an athlete sometimes, when you get hurt, you have to relearn your craft, and you've gotta do that. And I think that's sort of where it is.

"I've seen Paul so many times where he was just incredible, but over the last year or so, when you see him with KISS, it's not where it should be," Brown added.

Back in 2011, Stanley blamed his voice troubles on singing "through sheer willpower" to "cram in" as many shows as possible. "The nature of rock singing is a strain on the voice and when you compound that with that amount of shows, you're not giving yourself time to recuperate and the problem is compounded," the 66-year-old rock legend said. "I was finding myself working harder and harder to do what was once effortless, and having already passed through puberty, I was surprised to hear my voice cracking."

In a 2015 interview with The Huffington Post, Coverdale, who is also 66 years old, admitted that he couldn't see himself singing WHITESNAKE's "Still Of The Night" "how it's supposed to be done at 70. I just can't see that," he said. "But then again, I thought I was done at 30. It is physically demanding… I do still maintain a good mid-range and low voice, which seems to be appealing to a lot of people, particularly the ladies."