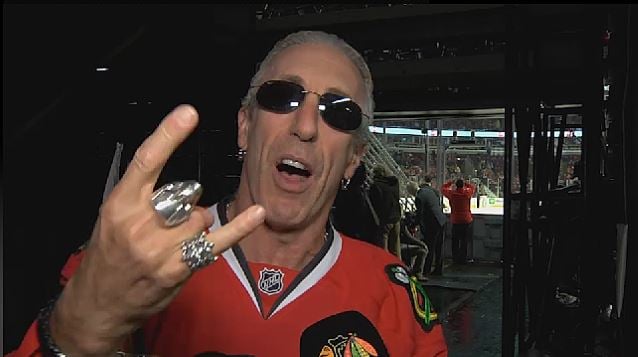 TWISTED SISTER frontman Dee Snider made a stop at the United Center in Chicago Wednesday night (October 15) to play "Shoot The Puck".

Snider, who is in town for the winter as he is working on "Dee Snider's Rock & Roll Christmas Tale", played the intermission game during Blackhawks' bout with the Calgary Flames.

The singer said: "I have never played hockey in my life, but 'Slaspshot' is my favorite movie."

"Dee Snider's Rock & Roll Christmas Tale" tells the story of DÄISY CÜTTER, a heavy metal bar band looking to make it big even though the '80s are LONG over. This year, these four guys are ready to take the ultimate step and, in mythic rock tradition, sell their souls to the devil in exchange for success beyond their wildest metal dreams! But every time they try to seal the infernal pact, their headbanging anthems turn into warm-hearted carols. Soon these rockers are forced to realize their dreams of stardom are no match for the Christmas spirit.