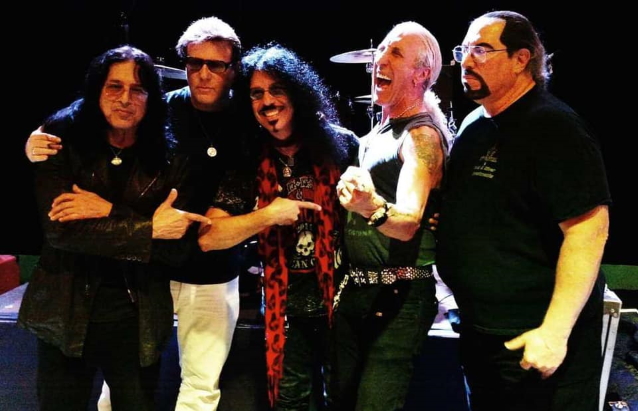 TWISTED SISTER Pays Tribute To FRANKIE BANALI: He Was 'An Inspiration'

TWISTED SISTER has paid tribute to Frankie Banali, who died earlier this week after a battle with pancreatic cancer.

On Friday (August 21),the members of TWISTED SISTER shared a photo that was taken when the QUIET RIOT drummer joined them for a two-song set in May 2016 at the Vegas Rocks! Hair Metal Awards in Las Vegas, Nevada, and they included the following message: "The TWISTED SISTER family has just lost another member. Frankie Banali, one of the founding members of QUIET RIOT has just lost his extreamely brave fight with pancreatic cancer.

"Frankie filled in for Mike Portnoy at the Las Vegas Metal awards show in 2016. Frankie became, for the day, the 9th drummer to pass through our history. We all shared (in 1983 and 1984) one of the greatest eras in the history of metal. Our thoughts go out to his family and to Rudy Sarzo, a QR bandmate and also a dear friend of ours. This coming on the heels of the death of Pete Way is all too much and too soon. The music world in general and the metal world in particular mourns the loss of both.

"Frankie was an inspiration in his fight to win this and we celebrate his memory tonight with family and friends...

"Jay Jay, Dee, Eddie, Mark as well as our agent Danny Stanton who brought Frankie to us for the Las Vegas show. Those memories, only 4 years ago feel like yesterday.

The Twisted Sister family has just lost another member. Frankie Banali, one of the founding members of Quiet Riot has...