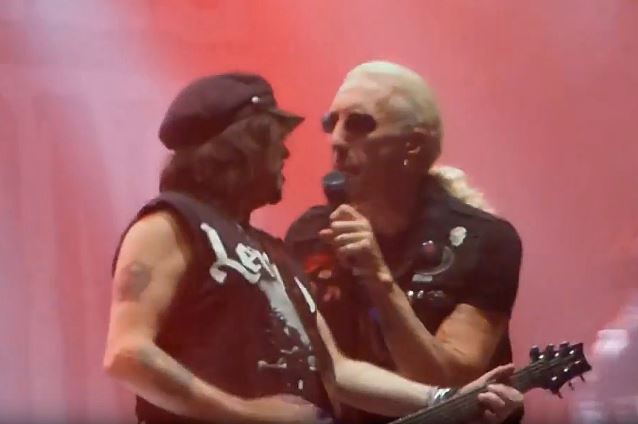 TWISTED SISTER frontman Dee Snider joined MOTÖRHEAD guitarist Phil Campbell's PHIL CAMPBELL AND THE BASTARD SONS (formerly PHIL CAMPBELL'S ALL STARR BAND) on stage on August 11 at the Bloodstock Open Air festival at Catton Hall in Walton-on-Trent, England to play MOTÖRHEAD's classic song "Born To Raise Hell". Also appearing with them on backing vocals was CORROSION OF CONFORMITY's Pepper Keenan. Fan-filmed video footage of the performance can be seen below.

While introducing the song, Snider paid an emotional tribute to late MOTÖRHEAD leader Lemmy Kilmister, saying: "This year we lost a friend, we lost a legend. This festival season, without Lemmy Fuckin' Kilmister, there's a hole in my heart. Without Lemmy out here, it don't seem right. So right now, Bloodstock — the only true motherfucking heavy metal festival in the fuckin' U.K. Fuck Download! This is the fuckin' show right here!"

Snider recalled in a 2015 interview how Lemmy played a crucial role in helping TWISTED SISTER break through in the U.K.

Snider said that TWISTED SISTER was offered the "special guest" slot on a bill at a July 1982 heavy metal festival headlined by MOTÖRHEAD at a soccer stadium in Wrexham, North Wales.

Making the situation even more daunting, "makeup-wearing bands were not only nonexistent but completely unacceptable to English metal fans," according to Dee.

Kilmister saved the day by offering to introduce TWISTED SISTER to the MOTÖRHEAD audience.

"Lemmy made it cool to like TWISTED," Dee later said. "At Wrexham, MOTÖRHEAD's crowd had their bottles ready for us. We were shitting our pants, so for the headliner to bring on the opening act was just the coolest thing possible. I'll love him forever for that."

In his autobiography, "Shut Up And Give Me The Mic", Snider wrote about the incident: "I am still not sure why Lemmy showed us this kindness. It's probably just the way he is wired and one of the reasons he is so beloved. He may be a pirate, but he's a benevolent pirate."