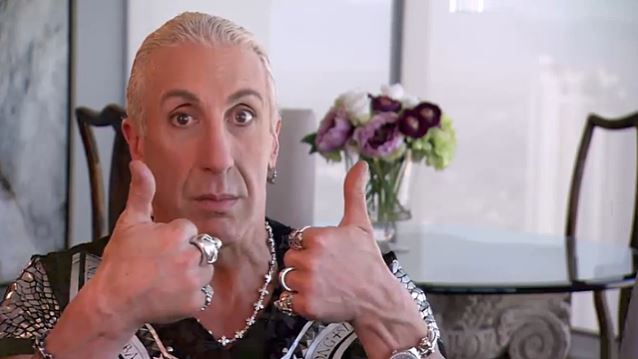 TWISTED SISTER's DEE SNIDER Featured On 'Oprah: Where Are They Now?'

TWISTED SISTER frontman Dee Snider was interviewed for the the popular series "Oprah: Where Are They Now?" , which recently returned for an all-new season on OWN: Oprah Winfrey Network. You can watch a clip from the episode below.

"You'll see things like 'one-hit wonder' — it's actually two — or the word 'flash in a pan,' or 'lucky,' or things like that applied to our band when that couldn't be anything further from the truth," Dee said.

"The biggest thing that surprised me about fame was that it was fleeting," Dee said. "You work so hard to get there and you just assume that it's some sort of finish line, or you take a victory lap and maybe spike the ball, run around the field screaming 'Goal," I don't know."

Snider has been married to his wife Suzette, a former TWISTED SISTER costume designer, for 34 years. They have four children — Jesse, Shane, Cody and Cheyenne — and currently live in Las Vegas.

TWISTED SISTER announced last night that it will embark on one final tour, dubbed "Forty and F**k It", in 2016.

To honor the memory of TWISTED SISTER's fallen drummer, A.J. Pero, two shows will take place this spring on the East Coast and West Coast. The first, on May 30 at the Hard Rock Hotel and Casino in Las Vegas, will be filmed for broadcast, DVD, and CD. The second, for the A.J. Pero family, is scheduled on Saturday, June 13 at the Starland Ballroom in Sayreville, New Jersey.