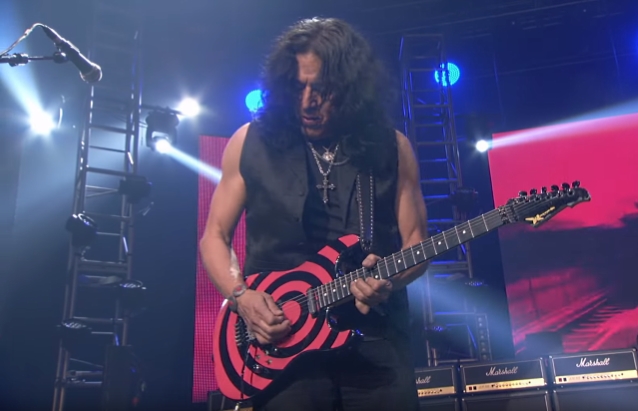 TWISTED SISTER's EDDIE OJEDA Is Moving To Nashville: 'It's Just An Easier Way Of Life Down There'

During a recent appearance on the "22 Now" show, TWISTED SISTER guitarist Eddie Ojeda revealed that he is relocating from New York to Nashville.

"There's a lot of people that have moved to Nashville — rock musicians," Eddie told "22 Now" host and TWISTED SISTER bandmate Mark Mendoza (see video below). "I mean, a lot. The list is endless. Every time I go down, I find out somebody else is living there. And it's just an easy place to get around. There's no tolls… It's just an easier way of life down there. And the music scene there is awesome. How many places do you get off a plane and see a Les Paul [guitar]? There's guitars everywhere. Every bar or restaurant you go to, there's some kind of tribute to the guitars. They call it Music City for a reason. It's starting to become one of the major places. I think Warner has a place down there… has a main office. Some of the big music companies are down there as well, like ASCAP and BMI. They used to just be based out of New York and Los Angeles."

Asked if he is planning to make any new music once he gets down to Nashville, Eddie — who recently became a grandfather — said: "Once I get settled in, I'll see what's happening. I'll see what comes across… Even just the few times I've been down there, people I've bumped into, everybody's into doing stuff together. It's a lot harder to do that here for some reason. And also, New York is getting pretty pricey, man… Manhattan is out of reach. Somebody who's a janitor is gonna have to make six figures to live in Manhattan… There's a lot of traffic and it's busy in Nashville too, but not like here."

TWISTED SISTER retired from the road three years ago after completing a farewell 40th-anniversary tour. The band's last-ever concert took place in November 2016 — 20 months after the passing of TWISTED's longtime drummer A.J. Pero.