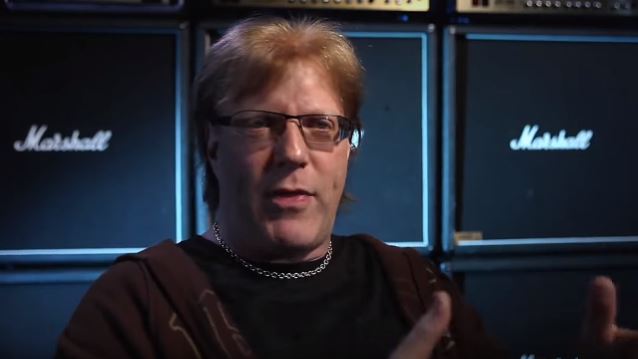 TWISTED SISTER's JAY JAY FRENCH: 'I Was Only Offered Drugs One Time Backstage By A Roadie Of A Band'

Seb Di Gatto of "The Metal Gods Meltdown" recently conducted an interview with TWISTED SISTER guitarist Jay Jay French. You can now listen to the chat using the SoundCloud widget below.

Asked if TWISTED SISTED has ever dabbled in devil worship, as they were accused of doing at the height of the 1980s phenomenon now referred to as the "Satanic Panic," French said: "It's almost comical. We never, ever did anything — not only from a religious standpoint, but from a drug standpoint, alcohol standpoint."

He continued: "You know, we were just a business. TWISTED SISTER was a band built on a business, and all the rest of it is just a bunch of peripheral nonsense. Now, you take all of this and manipulate it because it's good for the image, sure. But does KISS stand for 'Kids In Satan's Service'? Or did JUDAS PRIEST sell their souls to the devil?I mean, c'mon. It's all just a bunch of nonsense. And to the extent where bands can use it for publicity, it's great, but I have never… Not only have I never had a conversation with a single musician — ever — having to do with Satanic rituals vis-à-vis rock and roll, I can tell you that in the five years that TWISTED SISTER was touring around the world with every major band you can imagine, I was only offered drugs one time backstage by a roadie of a band."

The guitarist went on to say: "Now, I'm not gonna tell you that there's not drugs around, but what I'm saying to you is it never came into our view at all ever. Our reputation was that we were straight, [and] no one bothered us. But we were just working guys. And by the way, just about every band that's successful — KISS, [IRON], MAIDEN, PRIEST — these are hard-working guys. Well, they are; they just play rock and roll. They're just hard-working, very talented people whose mission was to become rock stars; they loved the idea. And maybe Lemmy [MOTÖRHEAD], you could say, lived a certain kind of life… emblematic of a certain kind of rock, maybe Lemmy you can throw in there. But other than that, I never saw any of it."

TWISTED SISTER is playing a number of shows this year as part of its final tour, dubbed "Forty and F**k It",.

"We Are Twisted F***ing Sister!" is a 134-minute documentary film by Andrew Horn. The film follows the band from their beginnings as a cross-dressing glam band playing four shows a night, six nights a week in New Jersey bowling alleys and Long Island beach bars, to the suburban mega-clubs of the late '70s and early '80s, to their bust-out appearance on the U.K. rock TV show "The Tube".