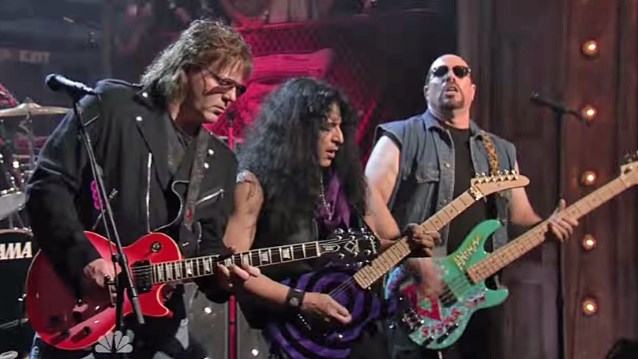 TWISTED SISTER's JAY JAY FRENCH: 'Rock Is Severely In Trouble' Because 'It's An Aging Cultural Phenomenon'

Canada's "The Metal Voice" recently conducted an interview with TWISTED SISTER lead guitarist and founder Jay Jay French. You can now listen to the chat in the YouTube clip below. A couple of excerpts follow (transcribed by BLABBERMOUTH.NET).

On whether he foresaw the decline of the "hair metal" genre prior to TWISTED SISTER's split:

"Looking back at it, it's hard to say if anything could have been salvaged. First of all, the entire genre fell apart, as you know. Shortly after we broke up, maybe a year after we broke up, the 'hair metal,' the whole business model dissolved, which affected everybody. So whether we could have sustained a business, considering the entire business model crashed and burned, it's hard to say. One can argue that the smartest thing we did was leave when we did. One can argue that was probably the best business move that was ever done, because we left it, and then we came back in the hole, which was something that… it had to happen, from may part; it's why I never put the band back on the road with other people. I wanted the band to be frozen in time, and at the right time, if the band came back, it would have enormous value. And, lo and behold, guess what?! The band's back and it has enormous value. Because we're only one of five bands that are touring with the original lineup. That's us, ZZ TOP, MÖTLEY [CRÜE], AEROSMITH and RUSH. So there's enormous value in that. So one can argue, taking the very long view, that it was actually the smartest thing. Was it fun going through the hell? No. Was it enormously eye opening? Yes. Did it teach some unbelievable lessons in life? Absolutely."

On whether he would prefer having the opportunity to launch a band in today's climate, with the Internet and social media, compared to how it was in the 1980s:

"Every band has its time, and TWISTED SISTER's time, the first flush of enormous success, was a very heady and wonderful experience. That would never be repeated again no matter what. I mean, no matter what — it would never be repeated that way. Because MTV isn't like that, because social media has changed… People ask me all the time: How's the music business? And I say, I don't know. I'm not in the music business. We are not in the music business. And, really, neither is JUDAS PRIEST, and neither is KISS. We're in the entertainment business. And we have a following and we entertain people. I don't really need to worry about record sales, because they don't exist. Not in the world of rock music. They exist in hip-hop and country and rap. This whole thing about, 'Is rock dead?' Rock isn't dead in the sense that hundreds of thousands of people go to see rock concerts. Where rock is severely in trouble is that it's an aging cultural phenomenon. It's over 50 years old, and it's not regenerating with the youth. I will give you an example. When I was 17 years old, and I was going to see shows, and I would see [LED] ZEPPELIN and THE [ROLLING] STONES and THE WHO and THE BEATLES and Jimi Hendrix and Bob Dylan. All those guys, when I was 16 and 17, they were 24 years old. Well, now, there are no rock bands coming up that are that enormous that are that young. But you've got plenty of hip-hop artists who are, and plenty of country artists who are, and plenty of female pop artists that are. But you don't have any rock bands that are regenerating and coming up. So what's happening is you're watching the aging out of a genre of music. And we are part of that. I mean, THE STONES are the leading edge, 'cause they're what? They're 90 or something like that. They're so old that their fans don't clap, 'cause they're afraid the lights would go on in the arena. That's a long answer to your question, because we have no choice to live in the era that we live in; we just do. We're grateful to have a career. But, again, we're not in the music business; we're in the entertainment business. It's a very different thing."