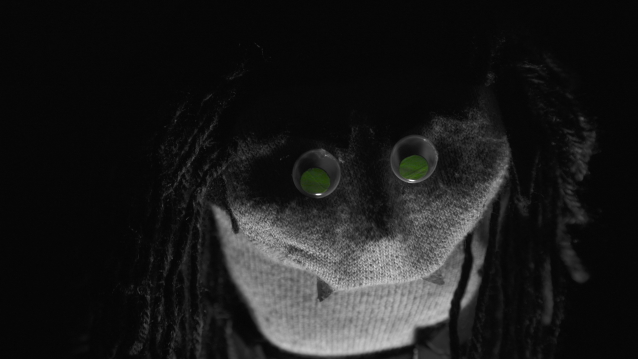 Here's a Halloween special to lose your threads over: TUBE SOCK NEGATIVE, a gothic group of animated undergarments, has set out to prove that black matches with everything and that even the tightest knit sock can have a soft side. The sock puppet outfit's song "Sock Nvr. Worn" pays homage to its undead counterpart TYPE O NEGATIVE's 1993 hit "Black No. 1".

By emulating the dark and ominous themes found in the lyrics of the late Peter Steele, "Sock Nvr. Worn" delves into the harsh reality that "life is lonely for a stocking not used." The "moon beam's sheen" offers a glimpse into the vampiric features of Feeter Steel as he gazes upon the "brand named mark" across his mistress. Functionless laundry is simply vagrant cotton. They are the vagrants.

YouTube artist Sock Puppet Parody has created a laundry list of parody videos including sock puppet tributes to SLAYER, METALLICA, SLIPKNOT and many more. This year's Halloween iteration was lovingly carried out by steadfast fans of TYPE O NEGATIVE! Don't mistake lack of socks for fashion.

Steele passed away in April 2010 from heart failure at the age of 48.