U.D.O., the German metal band fronted by former ACCEPT frontman Udo Dirkschneider, is currently in the studio recording the follow-up to 2007's "Mastercutor", tentatively titled "Dominator". An August 21 release via AFM Records is expected. A limited-edition single, "Infected", will precede the full-length CD on June 26. The single will be released as a limited edition of 2,222 pieces worldwide and will include the title track, two non-album cuts, a remix and a live song. On the same day U.D.O. will play at the Bang Your Head!!! festival in Balingen, Germany as a co-headliner. A listening/signing session will also take place at the festival.

In late 2009, U.D.O. is planning on hitting the road in the USA, Europe, South America and Japan.

U.D.O. released a "best-of" album, "Metallized - 20 Years of Metal", on November 30, 2007 via AFM Records. The CD booklet is filled with photos from the last 20 years and and includes liner notes written by Metal Hammer journalist Andreas Schöwe. The first 12 songs on the collection were chosen by fans via the official U.D.O. web site, while tracks 13 to 16 consist of two unreleased songs, an acoustic version of the ACCEPT classic "Balls to the Wall", and a live version of "The Bullet and the Bomb". 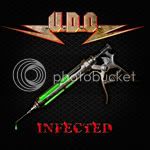